The upcoming Grammy Awards ceremony has a new date and a new location after being postponed due to a spike in COVID-19 cases, fuelled by the emergence of the Omicron variant. 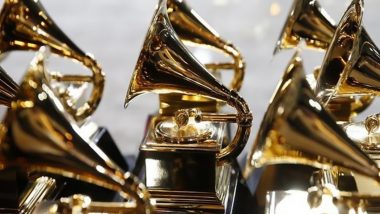 The upcoming Grammy Awards ceremony has a new date and a new location after being postponed due to a spike in COVID-19 cases, fuelled by the emergence of the Omicron variant. As per Variety, the 64th annual Grammy Awards will take place at the MGM Grand Garden Arena in Las Vegas on April 3. The news came via a joint announcement from the Recording Academy, CBS and CMT. As a result of the Grammy date change, the CMT Awards will now move from its originally scheduled date of April 3 to a later date in April. From Grammy Awards to Governors Awards; Here’s a List of Hollywood Awards Shows and Events Cancelled Amid COVID-19 Surge.

This year will mark the first time that the CMT Awards will air on CBS. The Recording Academy previously announced that Grammys, which will be hosted by Trevor Noah for his second consecutive year, would be postponed from January 31 due to rising concerns over the COVID-19 surge. The award show was previously set to take place in Los Angeles at the Crypto.com Arena. It's the first time the show will take place in Vegas. This is the second year in a row that the award show is postponed as a result of the COVID-19 pandemic. Grammy Awards 2022 Postponed Due to Spike in COVID-19 Cases and Omicron-Related Concerns.

Last year's Grammys also were postponed amid the pandemic. The original date, which also had been January 31, was ultimately moved to March 14. The ceremony featured a mix of live and pre-recorded performances, with awards handed out in front of a smaller group of nominees and other attendees. John Batiste is leading this year's nominations with a whopping 11 nods -- including album of the year, record of the year and best R&B album. Justin Bieber, Doja Cat and H.E.R. each notched eight nominations, while Billie Eilish and Olivia Rodrigo will head into Grammys night with seven apiece.

Additional details about the dates and locations of other Grammy events, including the Grammy Awards Premiere Ceremony, MusiCares Person of the Year and the Pre-Grammy Gala, will be announced soon. The 64th annual Grammy Awards will air live on CBS this April 3 from 8-11:30 pm ET/5-8:30 pm PT. Jesse Collins, Raj Kapoor and Ben Winston will serve as executive producers, with Kapoor taking over for Winston this year as showrunner. Jeannae Rouzan Clay joins the team as co-executive producer. Hamish Hamilton will return as director.