I Know What You Did Last Summer Reboot: Know the Cast of Amazon Prime's Horror Series

The Sony Pictures project is billed as a young adult horror series and is written by Sara Goodman of Preacher fame, reported Deadline. 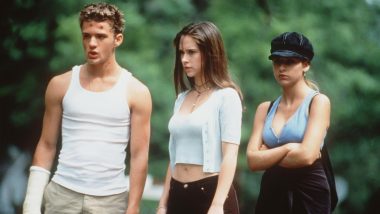 Still From 1997 Film I Know What You Did Last Summer (Photo Credits: Twitter)

Goodman is adapting the 1973 novel by Lois Duncan, the "I Know What You Did Last Summer" series has the same premise as the film adaptation -- In a town full of secrets, a group of teenagers are stalked by a mysterious killer a year after a fatal accident on their graduation night. While character descriptions are not being released, it is believed Iseman will headline the show, similar to  Love Hewitt in the movie franchise. Gossip Girl Reboot: New Characters of the Drama Series Introduced! We Wonder Who Will Be the ‘Serena and Blair’ Duo This Season

Goodman will also executive produce along with Shay Hatten, Original Film's Neal Moritz and Pavun Shetty, Erik Feig and Atomic Monster's James Wan, Rob Hackett and Michael Clear. Craig Macneill will serve as director and executive producer for the first episode. Production on the series will begin this month in Hawaii.