Get latest articles and stories on India at LatestLY. Two crocodiles were rescued on Wednesday from two different locations - Khaswadi crematorium and the Faculty of Technology in Gujarat's Vadodara. 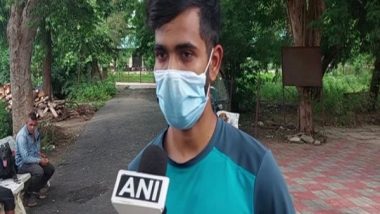 Speaking to ANI, Hemant Wadhwana, Animal Rescuer said, "My team has rescued two crocodiles from two different locations, that is, Khaswadi crematorium and the Faculty of Technology, after receiving the call on our helpline number."

According to Wadhwana, crocodiles came out of the river when the water level increases due to continuous rainfall.

"These crocodiles came out from Vishwamitri river flowing through the centre of the city. This river is the home to many crocodiles. Due to continuous rainfall in the city, crocodiles have come out because they need a stagnant place to live," he added.

Further, the animal rescuer informed that crocodiles fear losing their places whenever the water level rises in rivers, so they start coming out of it to live in one place. (ANI)