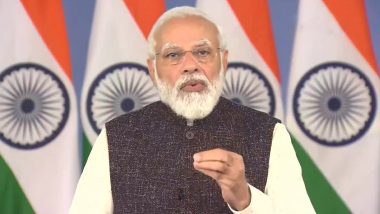 According to the PMO, the program will unveil yearlong initiatives dedicated to Azadi Ka Amrit Mahotsav by the Brahma Kumaris, which include more than 30 campaigns and over 15,000 programs and events.

In the My India Healthy India initiative, multiple events and programs will be held in medical colleges and hospitals with a focus on spirituality, well-being and nutrition. These include the organisation of medical camps, cancer screening, conferences for Doctors and other health care workers, among others.

Under Aatmanirbhar Bharat: Self Reliant Farmers, 75 Farmer Empowerment Campaigns, 75 Farmer Conferences, 75 Sustainable Yogic Farming Training Programs and several other such initiatives for the welfare of farmers will be held. Under Women: Flag Bearers of India, the initiatives will focus on social transformation through women empowerment and empowerment of girl child.

The Power of Peace Bus Campaign will cover 75 cities and Tehsils and will carry an exhibition on the positive transformation of today's youth. The Andekha Bharat Cycle Rally will be held to different heritage sites, drawing a connection between heritage and the environment.

The United India Motor Bike Campaign will be held from Mount Abu to Delhi and will cover multiple cities. The initiatives under Swachh Bharat Abhiyan will include monthly cleanliness drives, community cleaning programmes and awareness campaigns.

During the event, a song dedicated to Azadi Ka Amrit Mahotsav, by Grammy Award winner Ricky Kej, will also be released.

Brahma Kumaris is a worldwide spiritual movement dedicated to personal transformation and world renewal. Founded in India in 1937, Brahma Kumaris has spread to over 130 countries. The event is being held on the occasion of the 53rd Ascension Anniversary of Pitashree Prajapita Brahma, Founding Father of Brahma Kumaris.