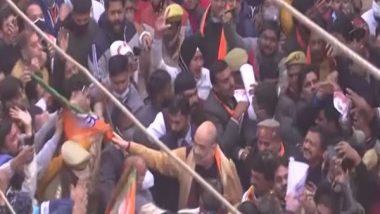 A day after participating in similar public engagements in Uttarakhand on Friday, the Shah on Saturday met people in some of the key regions of Western Uttar Pradesh including Muzaffarnagar and Saharanpur.

This is Shah's second public event in Uttar Pradesh in the last three days that started from Mathura and Greater Noida on Thursday.

At about 3 pm, the Home Minister will hold effective voter communication in Kota village in the Saharanpur Dehat area. Shah's day-long event will culminate with a door-to-door campaign in the New Shardanagar area in the Saharanpur constituency at 5.30 pm.