Guru Nanak Jayanti 2021 Celebration: How the Days Leading Up to Gurpurab Are Celebrated

People sing hymns in groups and play traditional musical instruments. The joyful procession passes through streets decorated with flags and flowers. Bystanders bow their heads to the Holy Scripture. The procession concludes at the Gurudwara with Ardas (prayer). 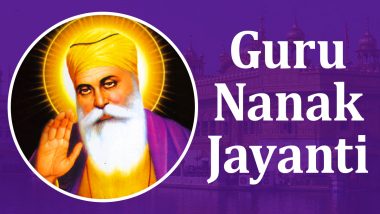 Guru Nanak was born on April 15, 1469, at Rai Bhoi Ki Talwandi, near Lahore, which is in the Sekhpura district of modern-day Pakistan. A Gurudwara was built at his birthplace in the city now known as Nankana Sahib. It's located in the Punjab province of Pakistan.

The date of Gurpurab varies from year to year as per the traditional lunar calendar. The festival is celebrated on the day of Kartik Poornima, which is the fifteenth lunar day in the month of Kartik according to the Hindu calendar, and usually falls in the month of November as per the Gregorian calendar. Guru Nanak Jayanti 2021 Celebration Live Streaming From Kartarpur Sahib and Nankana Sahib: Watch Live Telecast Of Shabad Kirtan From Holy Shrine In Pakistan.

ANI talked to Gurunek Singh, a spokesperson at a Gurudwara in RK Puram, Delhi, regarding how the days leading up to the occasion are celebrated. He said, "Celebrations mostly commence in Gurudwaras three days prior to the day of Guru Nanak Jayanti. A non-stop recitation of the Guru Granth Sahib, called Akhand Path, is held. During the path, the holy book is recited from the beginning without a break throughout day and night and men do it in rounds."

After the Akhand Path is finished, a day before the birthday, a procession called Nagar kirtan is organized, which is led by five men, referred to as the Panj Pyare (five loved ones), holding the Sikh triangular flag, Nishan Sahib. The holy Guru Granth Sahib is placed in a palanquin during the procession.

People sing hymns in groups and play traditional musical instruments. The joyful procession passes through streets decorated with flags and flowers. Bystanders bow their heads to the Holy Scripture. The procession concludes at the Gurudwara with Ardas (prayer).

Prabhat Feris, which are held on all three days during the early hours of the morning, are processions that begin at the Gurudwaras and proceed around the localities whereby a group of Sikhs go around a neighbourhood singing shabads (hymns). Guru Nanak Jayanti 2021 Wishes & 552nd Parkash Utsav HD Images: WhatsApp Status, Quotes, Wallpapers, Greetings and SMS To Send on Gurpurab.

Tomorrow, the last Prabhat Feri of this session will be taken out from the Gurudwaras which will be specially decorated to celebrate the birth anniversary of Guru Nanak with great pomp.

The day of Gurpurab will begin with the morning hymns, followed by the combination of Kathas and Kirtan in the praise of the Guru. Later, a special community lunch (Langar) will be organized followed by night prayer sessions at Gurudwaras. May the holy teachings of Guru Nanak Ji guide you along the correct path in life. Heartiest Gurpurab wishes.