Reigning US Open champion lost to Bulgarian in straight sets by 6-4, 6-4, 6-0 that lasted for over two hours. Dimitrov was on the top since the beginning of the clash as he won back-to-back sets and kept Thiem under pressure. 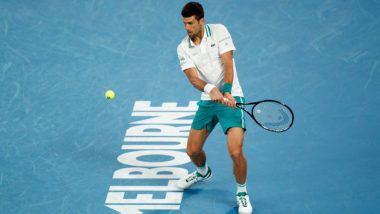 Melbourne, February 14: Serbian tennis player Novak Djokovic progressed to the quarter-finals of the ongoing Australian Open after a victory over Milos Raonic here on Sunday.

Djokovic secured a 7-6, 4-6, 6-1, 6-4 victory over Raonic and with this, the World No. 1 became only the second man (after Roger Federer) to record 300 match wins at the four Grand Slam championships. "The world No.1 becomes the 2nd player in history to notch up 300 Grand Slam match wins," Australian Open tweeted. The match lasted for two hours and 56 minutes. Djokovic will next meet world No.7 Alexander Zverev in the quarterfinal clash at Melbourne Park.

"There was no preparation for this match, I used every hour from this last match to recover. If it was any other tournament, other than a Grand Slam, I would have withdrawn. Because it's a Grand Slam, I still want to do my best," Australian Open's official website quoted Djokovic as saying after the match. Australian Open 2021: Naomi Osaka Survives Garbine Muguruza's Challenge in Fourth-Round, Makes It to Quarterfinals.

"During the match, it was on and off. It's not ideal. I'm taking it day by day. I cannot complain, I won the match against a great player and hopefully, it will be better in a couple of days," he added.

Earlier in the day, Germany's Zverev defeated Dusan Lajovic in the fourth round clash to reach the Australian Open quarter-finals. Zverev outclassed Lajovic 6-4, 7-6(5), 6-3 at Margaret Court Arena. The German got most of his first serves in and racked up 44 winners to dominate the 30-year-old Lajovic throughout the match.

After losing the first set, Lajovic came back strong and gave a tough fight in the second set as it went into the tie-breaker but his efforts went in vain as the German claimed it by 7-6(5). In the third set, Zverev claimed the match and cruised to the next round of the tournament.

Also, Dominic Thiem was knocked out of the Australian Open in the fourth round after losing to Bulgaria's Grigor Dimitrov at Rod Laver Arena. Reigning US Open champion lost to Bulgarian in straight sets by 6-4, 6-4, 6-0 that lasted for over two hours. Dimitrov was on the top since the beginning of the clash as he won back-to-back sets and kept Thiem under pressure.

In the third set, Dimitrov took full control of the match and claimed the set without losing a single point. The 29-year-old Dimitrov hit 25 winners, including 10 aces, while Thiem committed 41 unforced errors and won just nine of 28 points on his second serve. Dimitrov will now take on Russia's Aslan Karatsev in the quarterfinal match. The Bulgarian will be contesting his sixth Grand Slam championship quarter-final.