India now need to win both its remaining games against Scotland and Namibia in keep their hopes alive. The Men in Blue would also hope to register comprehensive to further boost their net run rate. 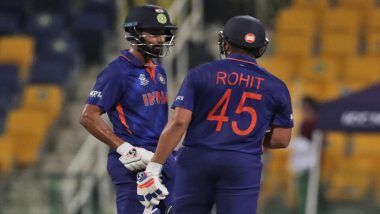 Abu Dhabi, November 4: India opening batter Rohit Sharma said that everyone got to see the quality of Ravichandran Ashwin in the ICC Men's T20 World Cup game against Afghanistan.

Rohit's comment after India defeated Afghanistan by 66 runs to keep their hopes alive of making it to the semi-finals. Ashwin made a comeback in the side and he returned with figures of 2-14 in his four overs.

"You saw his quality today. He's a quality bowler, without a doubt. He's played so much cricket now and taken so many wickets, obviously playing for India in limited overs. He also knows that it was a challenge for him because he was playing after three or four years. But he was playing IPL consistently and he was bowling really well. He's someone who's a wicket-taking option. Any time you give him the ball, he comes to take wickets," said Rohit during the post-match press conference.

"He's not there to survive or just to bowl his six balls and get away. He's always looking to take wickets, and when you have someone like him in the sport and in the playing 11, it gives that advantage that you have someone in the middle who can take wickets. That's the quality of him. He understands his bowling really well and has balled really well in IPL. He's coming off from good form, as well, so I'm glad that he could contribute to our success today, and I hope he can do the same in the next few games that we play, as well," he added. IND vs AFG Stat Highlights, T20 World Cup 2021: KL Rahul & Rohit Sharma Shine With the Bat as India Registers Their First Win in the Mega Event.

India now need to win both its remaining games against Scotland and Namibia in keep their hopes alive. The Men in Blue would also hope to register comprehensive to further boost their net run rate.

"Yeah, to be honest, it's very much that kind of a situation for us. We know that if we lose any game from here on now, we are out of the tournament, so we have to win everything, and when you are in that kind of situation, you have to play fearlessly, not think too much about what is happening or what is happening elsewhere," said Rohit.

"I think the approach today from everyone was different, and I wish it was in the first two games, as well, but it didn't happen. But that can happen when you are on the road for a long time. Decision making sometimes can be a problem, and that is exactly what happened in the first two games. We are a very good team. It's just that we were not good on that particular day against Pakistan and New Zealand. But yes, today the game we played, it's pretty much sums it up that this is the kind of team we are, and when we play fearlessly, this is what we get," he added.

In the game against Afghanistan, Rohit and KL Rahul scored 74 and 69 respectively and the duo shared an opening stand of 140 runs helping India post 210/2 in the allotted twenty overs.

"Yeah, I mean, firstly it was important for us to get off to a good start. If you talk about our batting, which didn't happen in the first two games, that's where we struggled a little bit to create that momentum in the first six overs, so there was a conscious effort. We were talking myself and KL, we were talking about it that we need to get the team a good start, and how we can do that is by playing our game, whatever that may be, however we want to play," said Rohit. BCCI Appoints Rahul Dravid As Head Coach of Indian Men’s Cricket Team.

"But yeah, we took our chances in the middle, and it came off, so that's the whole game. You take your chances, it comes off, it comes off. If it doesn't come off, you have to start again from the scratch. The batter who comes in has to start again from the scratch. We wanted to take some risks because it was important for us when the powerplay is going on, you try and make the best use of that, and we took our chances, and it came off," he added.