Kohli said the many moments which are created because of the passion brought in by fans, would be missing. 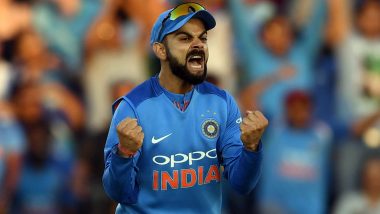 New Delhi, May 8: India skipper Virat Kohli believes cricket in empty stadiums is a real possibility in a post COVID-19 world and though it is unlikely to have a bearing on the intensity of players, he feels the magic would certainly go missing. Cricket Boards across the globe are exploring the option of resuming the sport in empty stadiums. There is speculation that fans could be kept away from stadiums in a bid to salvage the T20 World Cup in Australia, which is currently under threat due to the global health crisis. Virat Kohli Says ‘I Know I Will Be in a Good Position to Start From Where We Left’.

"It's quite a possible situation, it might happen, I honestly don't know how everyone is going to take that because we all are used to playing in front of so many passionate fans," Kohli said in Star Sports' show 'Cricket Connected'. "I know it will be played at a very good intensity but that feeling of the crowd connecting with the players and the tension of the game where everyone goes through it in the stadium, those emotions are very difficult to recreate," he added. David Warner Explains Similarities Between Him & Virat Kohli.

Kohli said the many moments which are created because of the passion brought in by fans, would be missing. "Things will still go on, but I doubt that one will feel that magic happening inside because of the atmosphere that was created. "We will play sports how it is supposed to be played, but those magical moments will be difficult to come by," he said.

Cricketers such as Ben Stokes, Jason Roy, Jos Buttler and Pat Cummins have backed the idea of playing behind closed doors. However, legendary Australian Allan Border has said it would defy belief to host a World Cup without spectators. Another Australian all-rounder Glenn Maxwell and some other cricketers have also expressed similar sentiments.