Donald Trump Froze, Failed to Act, Panicked in the Face of COVID-19, Says Joe Biden As Coronavirus Claim Over 200,000 Life in US 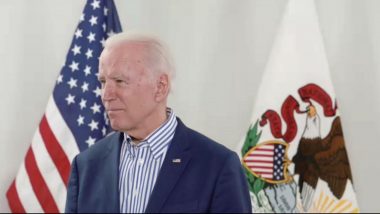 Washington, September 22: US Democratic presidential nominee Joe Biden has slammed President Donald Trump over his handling of the coronavirus which has so far claimed over 200,000 lives with nearly 700,000 confirmed cases in the country.

"What worries me now is we have been living with this pandemic for so long; I worry we are risking becoming numb to the toll it has taken on us and our country and communities. We can't let that happen. We can't lose the ability to feel the sorrow and loss and the anger for so many lives lost," Biden said at a rally in Wisconsin, a key swing state, on Monday. In the 2016 polls, Trump had won the state. Biden questioned Trump's leadership based on how he handled the COVID-19 pandemic.

"Today (Monday), unfortunately, America is going to reach a tragic milestone (of) 200,000 deaths of the coronavirus. As awful as the past 180 days have been, the next 90 days could be twice as bad,” the former vice president said.

Biden is leading Trump by a national average of 6.5 percentage points, according to Real Clear Politics, an aggregator of major opinion pools. Trump has reduced the gap substantially which was in double digits a couple of months ago.

In battleground states, Biden's lead over Trump dropped to 3.8 per cent, indicating that the November 3 elections is headed for a close finish.

“All of life, Donald Trump has been bailed out of any problem he faced; with this crisis zero -- a real crisis that required serious presidential leadership -- he just wasn't up to it, he froze, he failed to act, he panicked, and America has paid the worst price of any nation in the world," Biden said. Biden said the president knew of the dangers of the pandemic in February, but hid it from the American people.

"You can actually hear his own voice recorded by (journalist) Bob Woodward's interview with him, saying that he understood how bad it was. We hear him privately saying this is a deadly virus, far more deadly than any flu, but that's not what he was saying to us publicly," he said.

“Publicly he told us that it was just like the flu and that it would disappear in warm weather like a miracle. It was all a lie. What is his explanation? He said he didn't want to see the American people panic; he didn't want to panic them. Trump panicked, the virus was too big for him,” Biden said.

Biden alleged Trump was more concerned about the stock market than the health crisis. "Understand what he was saying because it crystallises his whole worldview when Donald Trump said he didn't want to create a panic he wasn't just talking about a health panic he was focused on the stock market. Trump was worried that if he told the public the truth, there would be a panic in the financial markets, and that would hurt his chances of being re-elected,” he said.

“That's how Donald Trump views the world. He sees the world from Park Avenue, I see it from where I grew up in a town like this from Scranton, Pennsylvania, hardscrabble, hard-working town just like this, and so many more across Wisconsin,” Biden said.

The Trump campaign hit back at the Democratic presidential candidate. “We don't have to guess how destructive a Joe Biden economy would be to the American people because we've already seen it. When Joe Biden was in the White House we had depressed wages and stagnant job growth. His vote for the horrible NAFTA trade deal killed 850,000 jobs, and his sycophantic support for China closed 60,000 US factories and sent 3.2 million jobs away from American workers directly to China,” said Hogan Gidley, Trump 2020 national press secretary. US Presidential Election 2020 Prediction: Joe Biden Holds Lead Over Donald Trump Among Indian-American Voters, Says Survey.

President Trump's policies have created more jobs in a four-month period than any other time in history, he asserted. In fact, the president's policies have already regained about half of the jobs lost to the pandemic, proving Trump rebuilt this economy once, and he's doing it again, Gidley said.

“Biden's proposal of a USD4 trillion tax increase on 82 per cent of Americans would shutter that success. Aliens would flood the recovering job market with competition, and his (Biden) Green New Deal would kill 10 million jobs in the energy sector,” he said.