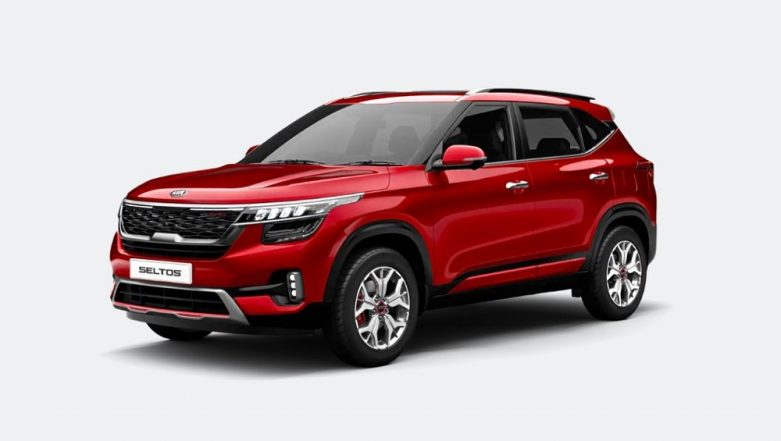 Kia Motors will be making its India debut with the much awaited Seltos SUV, which will be launched in the country tomorrow. The bookings of Seltos compact SUV have already started wherein the interested customers can pre-book the car on the official website or at any Kia dealership across India by making an upfront payment of Rs 25,000. The compact SUV will be offered in two trim levels - HT Line and GT line, however, there will be total nine variants on offer. These include HTE, HTK, HTK+, HTX and HTX+, GTK, GTX and GTX+ variants. Kia Seltos Bookings Open In India: Specifications, Expected Price, Where And How To Book The Car.

Coming to the interiors, the Seltos SUV will be equipped with a 10.25-inch touchscreen infotainment unit, 7-inch coloured MID, an 8-inch head-up display, eight speakers audio system from Bose, LED ambient lighting and more.  Kia Seltos Pre-Bookings Start at Rs 25000 in India; All You Need to Know About The Compact SUV

Kia's Seltos will come with eSIM based connected car technology, similar to the one seen on Venue. To be offered free for first three years, this connected car technology will be called UVO that will provide remote control access to ignition, air purifier, live tracking, AC and Geo fencing. Kia Seltos India Launch on August 22, 2019; Expected Price, Features & Specifications.

Mechanically, the Seltos SUV will be offered with a choice of petrol and diesel engines. The petrol unit will be a 1.5-litre petrol engine whereas the diesel unit will be a 1.5-litre oil burner. The former will be tuned to produce maximum power of 115PS with peak torque of 144Nm whereas the latter will generate 115PS and 250Nm of power figures. Transmission functionalities will be carried out by either a manual or an automatic gearbox. The company will also be introducing a1.4-litre turbocharged petrol mill that will make 140PS of power & 242Nm of torque. The engine will be clubbed with a 6-speed manual gearbox or a 7-speed DCT. Kia Seltos SUV: Expected Price, India Launch, Features, Specifications - 6 Things To Know

The countdown has begun. In just 24 hours, all your questions will be answered! Don’t miss the live webcast of the Kia Seltos India Launch. Set your reminder here: https://t.co/grFtxHkaQX#KiaSeltos #SeltosIndiaLaunch #BadassByDesign pic.twitter.com/pPUX8rye8z

The company is expected to price the new Seltos SUV in India starting from Rs 10 lakh to Rs 17 lakh (ex-showroom). The SUV will be pitted against the likes of Hyundai Creta, Nissan Kicks, Renault Captur, Maruti Suzuki S-Cross, Tata Harrier and MG Hector.