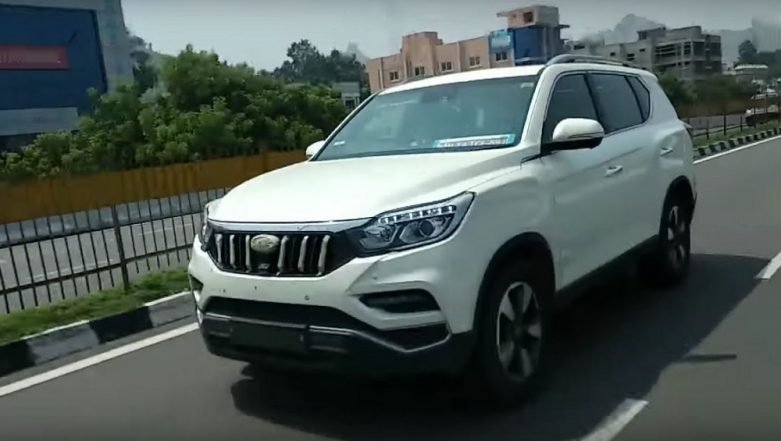 Mahindra & Mahindra, country's leading utility maker will be launching its newest luxury SUV in the country on November 19. Likely to be christened as XUV700, though unconfirmed, the full-size SUV is internally codenamed as Y400. The SUV will be introduced as a replacement to SsangYong Rexton in Mahindra's line-up. Ahead of its official launch, the SUV has been spied testing on the Indian roads without camouflage giving a clear shot of its overall design and look. 2018 Mahindra Y400 Rexton-Based SUV to Be Launched in India on November 19.

Going by the video, the Mahindra Y400 SUV can be seen testing on the roads of Karnataka without any camouflage. However, the SUV features a small tape upfront on the Mahindra logo. The upcoming SUV from Mahindra is also seen changing lanes and speeding away on few occasions when the driver realized of being captured on camera. On several instances, the SUV was captured crossing 170 kmph mark, which is quite fast for a big SUV. Mahindra TUV300 Plus SUV is Chairman Anand Mahindra's New Chariot.

To be introduced as a rebadged version of SsangYong Rexton, the full-size SUV will be manufactured at company's plant in Chakan. The SUV is expected to be packed with an extensive list of features and luxurious interiors. The SUV will be positioned about Mahindra XUV500 as a premium offering from the brand and will be retailed through new chain of showrooms for providing a premium experience to the customers. Feature-wise, the SUV is likely to be equipped with leather upholstery, 9-airbags, ABS with EBD, electric sunroof, touchscreen infotainment unit and much more. Mahindra Marazzo MPV Meta-Review: Marazzo is Mahindra's Best Step Forward, Says Critics.

As far as the powertrain options are concerned, the company has not specified any details yet. However, it is speculated that the SUV will be powered by the 2.2-litre diesel unit which is seen on the SsangYong Rexton G4 in the global markets. The diesel engine is capable of making maximum power of 187 Bhp and peak torque of 420 Nm and will be mated to a 7-speed automatic transmission.

Once launched, the SUV will compete against Ford Endeavour, Toyota Fortuner and Honda CR-V in the full-size SUV category. Moreover, the company is expected to price the SUV with an aggressive price tag. We speculate that the SUV could be priced around Rs 22 lakh (ex-showroom) when launched in the country.