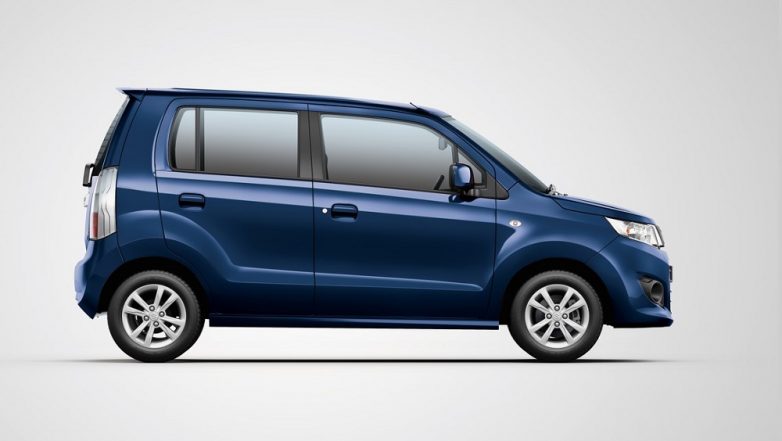 Maruti Suzuki India, a leading auto manufacturer will be launching the new generation Maruti WagonR hatchback in India next year. Expected to hit the Maruti Suzuki Arena showrooms by early next year, the company has already started testing the new iteration of the hatchback. The next generation WagonR will continue to sport its tall-boy design as some initial spy shots have confirmed the same. Maruti Suzuki Vitara Brezza Secures 4 Star Rating at Global NCAP Crash Test.

Though the latest generation WagonR is already on sale in the Japanese market, the India-spec unit will look different from the model sold in Japan. It is expected to be toned-down version of the Japanese model with longer bonnet, which is likely to feature the 1.0-litre, 3-cylinder petrol engine.

It is expected to be mated to a 5-speed manual gearbox and an AMT option could also be on offer. The Indo-Japanese car maker has already announced that the company will be launching the all-electric version of WagonR by the year 2020. Maruti Swift 2018 Limited Edition with New Features Launched; Priced in India at Rs 4.99 Lakh.

As per the sources, the new Maruti Suzuki WagonR is expected to be based on the all-new platform, which means the company will not use Suzuki's new Heartect platform to keep the prices low. Moreover, Hyundai is also launching the new Santro in India next month, which will be believed to be loaded in terms of features. The rivalry in the segment is expected to intensify as Maruti will also be looking to offer extensive features on the new WagonR. The new hatchback is expected to sport dual airbags and ABS as standard fitment throughout the line-up. Maruti Vitara Brezza, Baleno &#038; S-Cross Recalled Over Steering Issue; To Be Fixed Free of Cost.

Once launched in the country next year, the new Maruti Suzuki Wagon R will be pitted against the players such as Renault Kwid, Hyundai Santro, Tata Tiago and other cars in the segment. Expected to retail around 18,000 units each month, Maruti Suzuki India will be looking to keep the prices pretty competitive.