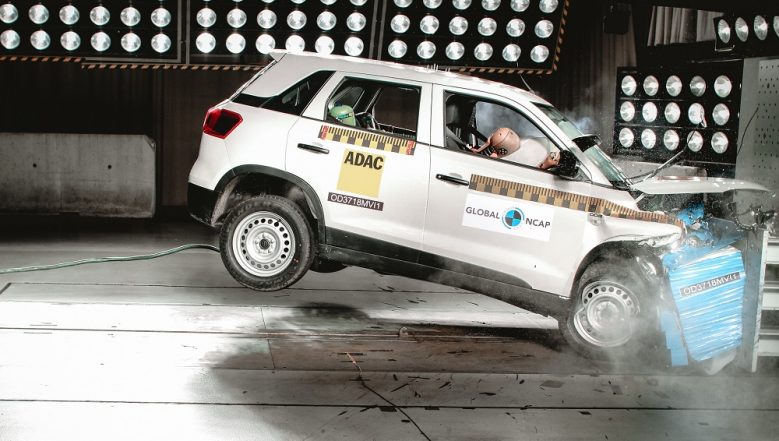 Indian manufacturers now seems to be getting pretty much serious about the safety aspect of the passengers. After Nexon sub-compact SUV scoring an impressive 4-star rating at Global NCAP, Maruti's best-selling SUV - Vitara Brezza too has secured similar ratings at the crash test. Tested at 64kmph, the 2018 version of the Maruti Suzuki Vitara Brezza scored 12.51/17 for the adult occupants and 17.93/49 for child occupants that makes it worthy of the stars.  Maruti Swift 2018 Limited Edition with New Features Launched; Priced in India at Rs 4.99 Lakh.

Fitted with dual airbags, ABS, and ISOFIX anchorages as standard, Maruti’s popular SUV managed to grabbed two stars for the child occupant protection and four stars for the adult occupant protection. Moreover, the body shell of the SUV remained stable capable of withstanding further loads. It also provided protection to the driver and passenger on head as well as neck. As a reminder, the Nexon also secured 4 stars at Global NCAP's crash test wherein Tata scored 13.56/17 under the same parameters for adult passengers. On the other hand, the SUV scored 25/49 for child occupants. Maruti Vitara Brezza, Baleno & S-Cross Recalled Over Steering Issue; To Be Fixed Free of Cost.

As the fact that the Indian government has become strict about introducing more stern safety norms in the country is an added advantage. And, the awareness for safety among customers is compelling the manufacturers to make their cars safer for the passenger. On the other hand, the global NCAP also tested Renault Lodgy, which failed to impress in the crash test with zero star rating. However, it secured two-stars for the child occupant protection, but failed to make an impact in the Adult Occupant Protection.