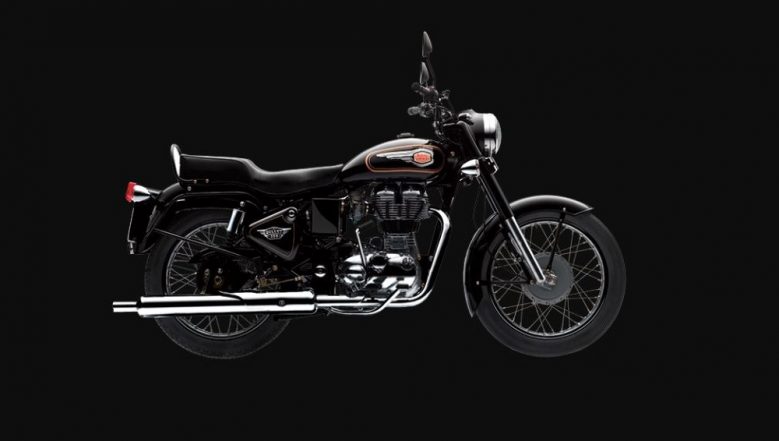 Royal Enfield, the Chennai-based two-wheeler manufacturing company has officially recalled over 7,000 units of Bullet 350, Bullet 500 and Electra models across the country. The recall for 3 popular models is intended for replacing a faulty brake caliper bolt. The motorcycles manufactured between 20th March and 30th April, 2019 are subjected to recall, which will be carried out without any cost. However, it remains to be seen if this set of motorcycles include the newly introduced ABS versions. Royal Enfield Bullet 350, 350 ES With ABS Launched; Price in India Starts From Rs 1.21 Lakh.

Royal Enfield issued a statement in a press release stating that, "This is because service investigations revealed that the torque maintained on brake calliper bolts, as supplied by the vendor, on a few of these motorcycles were not as per stringent Royal Enfield quality standards. Brake calliper bolt is an essential part of braking system securing the brake hose and brake calliper. This voluntary service action will be undertaken on close to 7,000 motorcycles that were retailed during the said period. All concerned customers are being called for a service intervention, and various stakeholders are being informed accordingly."

It is important to note that Bullet 350 and Electra 350 models are one of the popular motorcycles from RE's product line-up after Classic range. Both Bullet 350 and Electra 350 motorcycles are powered by a 346cc, 4-stroke petrol engine that makes 19.8 bhp of maximum power with peak torque of 28Nm. The petrol mill is clubbed with a 5-speed manual gearbox. On the other hand, Bullet 500 model is powered by a 499cc unit that is capable of making 24bhp of max power with peak torque of 40.5 Nm. The unit also gets 5-speed manual gearbox. Royal Enfield Launches Bullet Trials 350 and 500, Priced at Rs 1.62 and Rs 2.07 Lakh; Watch Video

As far as the prices are concerned, the Bullet 350 and Electra ES are priced at Rs 1.21 lakh and Rs 1.35 lakh (ex-showroom). On the other hand, the Bullet 500 costs Rs 1.88 lakh (ex-showroom). Royal Enfield's portfolio comprises of several products including recently launched Interceptor 650, Continental GT 650, Himalayan, Bullet range and Classic range.