The Supreme Court on Friday rejected the challenge against the constitutional validity of the Maharashtra Protection of Interest of Depositors (in Financial Establishments) (MPID) Act, as it upheld the attachment of properties of 63 moons Technologies by the Maharashtra government. 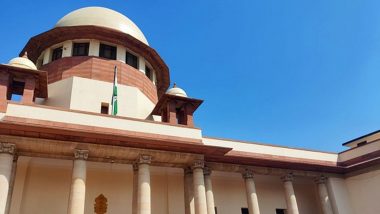 New Delhi, April 22:  The Supreme Court on Friday rejected the challenge against the constitutional validity of the Maharashtra Protection of Interest of Depositors (in Financial Establishments) (MPID) Act, as it upheld the attachment of properties of 63 moons Technologies by the Maharashtra government.

A bench of Justices D.Y. Chandrachud, Surya Kant, and Bela M. Trivedi said: "Having discussed the judgments of this court on the constitutional validity of the state legislations governing financial establishments offering deposit schemes, including the MPID Act, there is no reason for us to reopen the question. This court has held that the MPID Act is constitutionally valid on the grounds of legislative competence and when tested against the provisions of Part III of the Constitution." Supreme Court Slams Centre in Abu Salem Case, Says ‘Don’t Need Lecture From Home Secretary’.

The bench said the validity of the MPID Act was specifically dealt with in two decisions of the top court, and in both the decisions, this court upheld its constitutional validity in view of the earlier decision in the case of Bhaskaran.

"In Soma Suresh Kumar v. Government of Andhra Pradesh, a two-judge bench of this court upheld the provisions of the Andhra Pradesh Protection of Depositors of Financial Establishments Act 1999 following the earlier decisions in Bhaskaran and New Horizons Sugar Mills Ltd," said the bench.

The top court also upheld the decision of the Maharashtra government to attach the company's assets under the MPID Act in connection with the National Spot Exchange Ltd (NSEL) case. The bench set aside Bombay High Court judgment, which quashed the notifications by the state government against 63 moons. The Maharashtra government had moved the top court challenging the high court judgment. Rajiv Kumar Quits as NITI Aayog Vice Chairperson, Suman Bery To Succeed.

"We allow the appeals and set aside the impugned judgment of the Bombay High Court dated August 22, 2019. The impugned notifications issued under Section 4 of the MPID Act attaching the properties of the respondent are valid," said the top court, in its 75-page judgment.

The Maharashtra government had issued attachment of assets notices for allegedly defrauding over 13,000 investors. In July 2013, about 13,000 persons who traded on the platform of NSEL claimed that other trading members had defaulted in the payment of approximately Rs 5,600 crore. NSEL issued a circular on 31 July 2013 suspending its spot exchange operations.

The Economic Offences Wing registered cases against the directors and key management personnel of the NSEL and 63 moons and against trading members and brokers of NSEL under the provisions of the Indian Penal Code and the MPID Act. 63 moons moved the Bombay High Court. In its judgement in 2019, the Bombay High Court had said: "NSEL is not a financial establishment within the purview of the Maharashtra Protection of Interest of Depositors (MPID) in Financial Establishments Act (under which attachment was made). Hence, we decline the prayer (of the state)."

The high court held that NSEL was not a financial establishment since it did not accept any deposits, as defined under the MPID Act. It noted that NSEL was a commodities exchange where commodities were traded between willing buyers and sellers acting through their brokers.

(The above story first appeared on LatestLY on Apr 23, 2022 09:38 AM IST. For more news and updates on politics, world, sports, entertainment and lifestyle, log on to our website latestly.com).