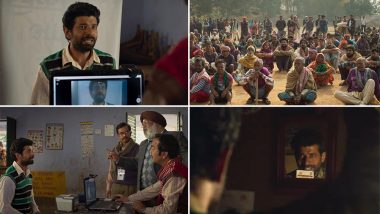 Viineeet Kumar Singh will be next seen in the movie, Aadhaar. The actor shot to fame with Anurag Kashyap's Mukkabaaz. In Aadhaar, the actor plays the role of a simpleton, ought to become the first person in his village with a government-issued Aadhaar card. A few days back the first poster of the film was released, which was quite creative. Today, the first teaser of Aadhaar was released online. Without divulging much, the first footage is only two-scenes long. But it is enough to declare the tone of the film.

We see Viineet's character visit an Aadhaar centre to get his card. The employees there ask him not to smile for the pictures, which makes for satire for all government-related issues. You will find yourself chuckling after you see the clip. EXCLUSIVE! 'Gold' Actor Vineet Kumar Singh Opens Up About Courting Controversy with His Upcoming Film 'Aadhaar'.

Watch The Trailer of Aadhaar Here:

Aadhaar has been directed by National Film Award-winning director Suman Ghosh. The movie will have its premiere at Busan International Film Festival in October. "I am honoured and extremely happy that my Hindi feature debut is making its world premiere at Busan, a festival that has always given our films a very warm reception. I am grateful to my wonderful cast and crew, and my producers Drishyam Films and Jio Studios for their unwavering support and courage so I could make the film I had envisioned," Ghosh said in a statement.

In the past, the director has said that a New Yorker article was the inception of the story of Aadhaar in 2011. He said that Aadhaar is a snapshot of modern India and the story of a common man.

(The above story first appeared on LatestLY on Sep 06, 2019 09:07 PM IST. For more news and updates on politics, world, sports, entertainment and lifestyle, log on to our website latestly.com).