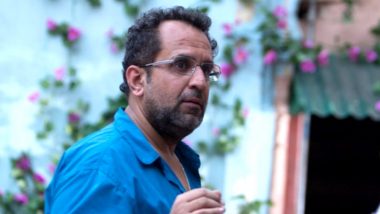 Tanu Weds Manu filmmaker Aanand L Rai, who celebrates his birthday on Tuesday, recently shared the reason behind making films that find their physical setting in small towns. The filmmaker shared that he always wanted to tell the stories from the heartland of India and make them a part of the cinematic landscape. Raanjhanaa Clocks 9 Years: Aanand L Rai Shares a Throwback Picture of Sonam Kapoor and Dhanush From the Film, Says ‘In the End We Will All Become Stories.’

Elaborating on the same, the director shared, "I have always wanted to make India's heartland a big part of our cinematic landscape and I'm happy to see that it finally is! I am grateful for all the love that has been showered upon my films so far. It has indeed been a journey full of learnings, lessons and love. I am excited about what the future holds with small-town stories becoming increasingly popular with the audience. I hope to continue giving you films that will make you laugh, love, cry and tug at your heartstrings", he added. Raksha Bandhan Motion Poster Out! Akshay Kumar, Bhumi Pednekar’s Film by Aanand L Rai To Hit the Big Screens on August 11 (Watch Video).

On the work front, Aanand has two films lined up for release, the first being his directorial Raksha Bandhan which stars Akshay Kumar and Bhumi Pednekar, which will arrive on cinemas on August 11 where it will clash with the Aamir Khan and Kareena Kapoor Khan-starrer Laal Singh Chaddha.

His other release is the Janhvi Kapoor-starrer OTT film Good Luck Jerry which has been directed by Sidharth Sengupta under Rai's Colour Yellow Productions. The film will drop on OTT on July 29. In addition, his production An Action Hero, starring Ayushmann Khurrana and Jaideep Ahlawat, is in its final stages.

(The above story first appeared on LatestLY on Jun 28, 2022 02:17 PM IST. For more news and updates on politics, world, sports, entertainment and lifestyle, log on to our website latestly.com).