The clip is taken from an old video from the chat show Maza Katta from ABP Majha. In the video, Akshay Kumar talks about the importance of charity. In the conversation, Akshay raises his own film, 2008's OMG: Oh My God!, that has a critical view of religious malpractices. 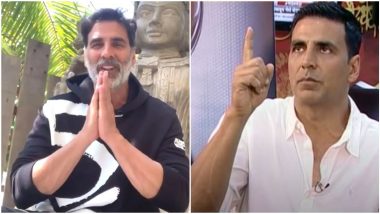 Akshay Kumar, like some of his peers, has always been a strange example of paradoxes. While the actor and his movies preach patriotism and nationalism, the superstar himself is a Canadian citizen by choice. Recently, Akshay once again became a example of self-paradox when an old video of his went viral. In the throwback video, Akshay Kumar, speaking in Marathi, is seen dissing Hindu worship rituals and asking why so much money is being wasted on such things, when it could be put to better use. Akshay Kumar Donates for Ram Temple Construction in Ayodhya, Urges Fans to Contribute for the Massive Donation Drive (Watch Video).

The clip is taken from an old video from the chat show Maza Katta from ABP Majha. In the video, Akshay Kumar talks about the importance of charity. In the conversation, Akshay raises his own film, 2008's OMG: Oh My God!, that has a critical view of religious malpractices. He asks what's the need for wasting oil on Hanuman's statues and breaking coconuts in temples, when you can use that money for the betterment of the society.

You can watch the whole interview here:

If you watch the whole interview, you would be surprised by Akshay's liberal views. Like, he is talking a lot about farmer's welfare and worries over the increase in farmer suicides. So those who are accusing the superstar for not speaking up about the ongoing farmers' protests, all you need to do is go back in time (this interview was before Rustom released). He also talked that he is of the belief that women should be allowed in Shani Shingnapur, a temple that once banned female devotees, till a landmark Bombay High Court decision overturned the ages-old tradition. After Accepting to Be a Canadian Citizen, Akshay Kumar’s Old Video Calling ‘Toronto Is My Home’ Goes Viral.

Well, years seems to have changed the National Award winner, who recently put out a video where he says he is contributing towards Ram mandir donation drive in Ayodhya, and requests his fans to do the same.

After the earlier clip went viral, Twitterati has been calling out the double standards of Akshay.

I completely agree with the sentiments expressed in this video. Even if the people in it may not agree with them any more. #MandirBanaoBaakiSabBhoolJaao https://t.co/jwrQlZvK17

Time (and Governments) Can Change People

@PrakashJavdekar ministry has summoned #Amajon for #Tandav but I dont think they will take any action against @akshaykumar , for Hurting Hindu sentiments. https://t.co/YdOTWgyaXz

@akshaykumar hence God has not told to make a extremely expensive temple, it would have been economical & rest money could be utilized in public welfare https://t.co/uJGUIu2U9Z

Technically, He Isn't An NRI...

Once an opportunist NRI said https://t.co/RGikheJRg8

Wonder what reasoning Akshay Kumar would come up with after seeing this old video of his. Also wondering, if he still stands up his film OMG: Oh My God! that would have bound to cause controversies in present times (though it actually shows Hinduism in a positive light), like Tandav. Just wondering... BTW, Akshay is making a film on Ram Setu so that could be an inspiration for the attitudinal change.

(The above story first appeared on LatestLY on Jan 18, 2021 10:12 PM IST. For more news and updates on politics, world, sports, entertainment and lifestyle, log on to our website latestly.com).