Alaya F On Jawaani Jaaneman: Was Excited About Getting Pregnant Till I Realised The Abs Would Be Covered Up 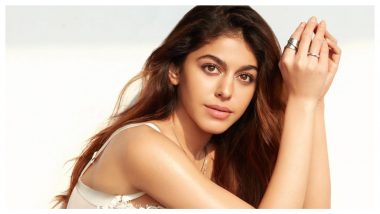 Alaya F made her film debut with Jawaani Jaaneman in January 2020. The actress was recognised as a strong performer right off the bat. "Not one criticism for my performance; it was too good to be true! So then, the hunt began for one bad review, even among the YouTube trolls," she told Mumbai Mirror. Alaya played the gutsy role of a 21-year-old who is pregnant out of wedlock, trying to reconnect with her father she has never met. Her father's role was played by Saif Ali Khan. The actress said that she had no qualms about playing a pregnant woman in her first film. For Alaya F, It’s a Sun Kissed, White Shirt, Denim Shorts Kinda Quarantine Day!

She said, "It was a very real-looking, heavy prosthetic belly which gave me a backache. I was excited about getting pregnant till I realised the abs I’d taken months to acquire would be covered up," Wel, legit concern, given the fact that she has worked hard on her abs and looks fabulous flaunting her midriff.

"My biggest fear was that I might not be as good as I thought I was or wanted to be, that I’d let down myself and others. There were many sleepless nights," Alaya added.

Earlier, in an interview, Alaya was asked if the online trolling affect her, she said, "Little bit, yeah, because it’s also my first time doing this. It is always on my mind, which is why I actually say ‘um’ a lot. I was reading comments on YouTube and I saw people were like, ‘Why does she say um so much?’ I was like, ‘Because I am really thinking about what I am saying. I don’t want to say something stupid and then get trolled heavily for it.’ I would rather say um than something very stupid."

(The above story first appeared on LatestLY on May 13, 2020 12:35 PM IST. For more news and updates on politics, world, sports, entertainment and lifestyle, log on to our website latestly.com).