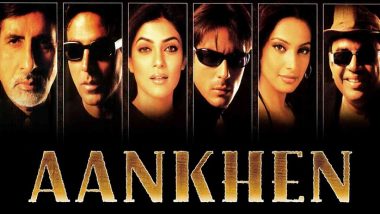 Aankhen, starring Amitabh Bachchan, Akshay Kumar, Sushmita Sen, Paresh Rawal and Arjun Rampal, released 19 years ago on this day. Looking back, the film's director Vipul Shah recalls how several people had warned him his career as a storyteller would end if the unconventional thriller failed. The film casts Big B as a mastermind who coerces a teacher of the blind (Sushmita Sen) to train three visually-impaired men (played by Akshay Kumar, Arjun Rampal and Paresh Rawal) to successfully rob a bank. Amitabh Bachchan To Team Up With Sushant Singh Rajput, Jackie Chan and Vicky Kaushal For Aankhen 2? Read Details.

"When Aankhen was being made, a lot of people in the industry had bet on the film being a super flop, because Mr Amitabh Bachchan was playing a grey shade character for the first time -- rather negative -- and Akshay Kumar did not have a romantic track, and all the three heroes were blind -- Akshay, Arjun Rampal and Paresh Rawal. Sushmita Sen had a romantic track with Arjun who was a relatively new hero. These were the reasons given to me by various people that if you go ahead and make this film, it would be a supreme disaster," Shah recalls. Aankhen 2: Has Saif Ali Khan Been Roped In to Play a Role That Akshay Kumar Had Portrayed in the First Part?

He adds: "I was warned that with such a big star cast if my film didn't do well, then my career as a filmmaker would be over. I did not listen to any of this because I had nothing to lose. I just wanted to make a film I believed in, and I did not think about success or failure." The film did decent business at the box office and infused confidence in Shah, who is currently co-directing the web series Human with Mozez Singh.

"Luckily, Aankhen became a big success. It was amazing to see reactions of the people in theatres. I think everybody got surprised, even the pandits who were forecasting it to be a flop were surprised. The success made my belief stronger that you should just go ahead and experiment. Some of them may work, some may not, but unless you keep experimenting, you are not going to break new grounds," shares Shah.

He adds: "With Aankhen, we broke new grounds and it's just one of those films that, with every passing year, become bigger for the audience and their love." Besides Human, Shah is currently working on an action film titled Sanak, starring Vidyut Jammwal.

(The above story first appeared on LatestLY on Apr 05, 2021 07:31 PM IST. For more news and updates on politics, world, sports, entertainment and lifestyle, log on to our website latestly.com).