Bollywood actress Anushka Sharma who has always been big support when it comes to animal rights recently shared a moving post on her Instagram highlighting the plight of the voiceless creatures. Check it out. 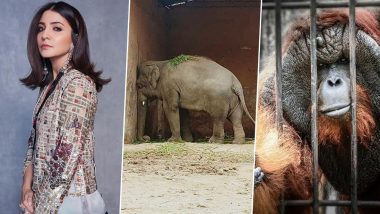 Bollywood actress, Anushka Sharma is an avid animal lover and has been proving the same time and again with her social media posts. Recently, she shared a series of pictures on her Instagram which sees a number of animals caged in the zoo. The Zero actress via the post has urged humans to open their eyes and see the truth behind these voiceless creatures who are locked at zoos and circuses. Along with the many photos, the actress also made a harsh point emphasizing on how keeping them caged for our entertainment is too unfair. In a nutshell, the Bollywood star has raised her voice against animal cruelty amid the lockdown. Anushka Sharma and Virat Kohli Mourn the Loss of Their Pet Pooch Bruno (View Posts).

From elephants, chimpanzees to bears, Anushka's post highlights the plight of the caged animals who have been quarantined forever. Not just this, in her long post, she also compared the situation of these animals with that to humans who are practising lockdown amid the crisis. She mentioned how we the people feel depressed and want to set free once the lockdown gets lifted and so think the next time one visits a zoo, circus or any other established that keeps animals locked and chained. Moving and how! Anushka Sharma Workout And Diet: Learn Fitness Secrets Of Bollywood Actress' Healthy Lifestyle As She Turns 32.

#Repost @tedthestoner Not even a hundred days of lockdown and all of us are complaining about feeling anxious, depressed or simply unwell. We speak about our desires to roam free because we feel caged. Remember your current state the next time you visit a zoo, a circus or any other established that keeps animals caged. We are all guilty of visiting these places, but somewhere down the line this has to stop. They weren't born for your entertainment. They have a life, just like you. Keeping a life caged for your entertainment is too unfair. Every voice matters. They feel the anxiety too. They feel the same trauma you feel when you're caged, that added with a thousand people irritating them by invading their private space. Make a choice. It counts.

Well, this is not the first time Sharma has got vocal about animal rights and cruelty. As it was she who started #JusticeForAnimals campaign long back and also a few days ago had shared a list of organisations on her Instagram who are helping the stray animals. Meanwhile, on the work front, Anushka is basking in the success of her latest series Paatal Lok.  Stay tuned!

(The above story first appeared on LatestLY on May 23, 2020 01:40 PM IST. For more news and updates on politics, world, sports, entertainment and lifestyle, log on to our website latestly.com).