Arshad Warsi’s Inflated Power Bill Problem Solved, Actor Thanks Adani Electricity for Their Quick Response, Says ‘All You Have to Do Is Contact Them’ 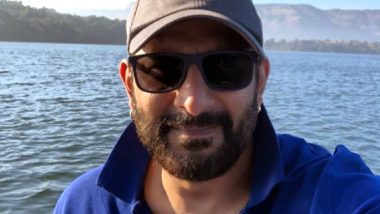 Bollywood actor Arshad Warsi took to social media complaining about receiving an exorbitant electricity bill but then later shared that his problem was solved. Arshad, in a tweet, had shared that that Rs 1,03,564 was debited from his account on July 5 for the electricity bill. He then shared a news article about his paintings and asked everyone to buy it. He had tweeted: "People please buy my paintings, I need to pay my Adani electric bill, kidneys am keeping for the next bill." Arshad Warsi Humorously Asks Fans To Buy His Paintings So That He Can Pay Inflated Adani Electricity Bills! (Read Tweet)

Later on Sunday, Arshad shared that he got a quick response from the electricity company and that his problem was solved. "And yes there is a light at the end of the tunnel. Quick response from @Adani_Elec_Mum problem solved. All you have to do is contact them.... thank you," he wrote. This is not the first time an actor has received such a high electricity bill. Huma Qureshi and Renuka Shahane Irked Over Exorbitant Electricity Bills, Share Screenshots and Lash Out At Adani Power On Twitter

And yes there is a light at the end of the tunnel. Quick response from @Adani_Elec_Mum problem solved. All you have to do is contact them.... thank you 🙏🏼 ...

Bollywood celebrities like Taapsee Pannu, Renuka Shahane, Huma Qureshi, Nimrat Kaur, Soha Ali Khan, Amyra Dastur, Dino Morea, and Kamya Punjab among many others have alleged receiving an inflated electricity bill for the month of June. Not just Bollywood names, but residents across Mumbai have been complaining about abnormally high electricity bills, which they received after the lockdown.

(The above story first appeared on LatestLY on Jul 05, 2020 06:04 PM IST. For more news and updates on politics, world, sports, entertainment and lifestyle, log on to our website latestly.com).