Attack: John Abraham Hurts Himself While Shooting an Action Scene, Shares a Video of Him Wiping the Blood

He is seen getting a little troubled as the person cleans the wound. He then asks for the cotton ball which the person used to clean the wound and showed off the blood that he lost. 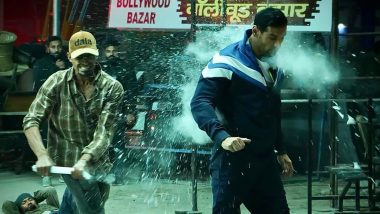 When it comes to action there is nobody like John Abraham. We have seen the actor outdo himself with every film and impress the fans with his action scenes. The actor has been pretty busy with his upcoming projects and is currently working on Lakshya Raj Anand's Attack. He is often seen sharing updates from the sets of the film with his fans on social media as well. Yesterday, the actor injured himself while performing a stunt and he took to Instagram to share a snippet of the incident. John Abraham to Remake Prithviraj Sukumaran and Biju Menon’s Malayalam Film Ayyappanum Koshiyum in Bollywood.

In a post shared by the handsome star, we see in dressed in an athleisure avatar. He is standing with his eyes closed while a crew member is smashing a tube light on his head. The pieces of the tube light are scattered everywhere and by the looks of it, the scene that John must have been shooting at the moment the picture was clicked would be very intense. Once you swipe the post, we see a person wiping on blood off of John's neck. He has injured himself and looks very proud of it.

He is seen getting a little troubled as the person cleans the wound. He then asks for the cotton ball which the person used to clean the wound and showed off the blood that he lost. Happily, he brought the cotton ball towards the camera and cheered saying 'Yay'. The person who is recording the same says, "This is real blood. This is what it takes to make a real action movie." John added a hilarious caption to the video as well.

Attack will mark Jacqueline Fernandez reunion with John Abraham as well. The two have been bonding big time over food, fitness and workouts, on the sets of their upcoming film. "He (John) is someone who is super fit and we bond on everything - be it food, fitness, workouts and all that stuff. I think he is doing amazingly well. It's my fourth film with him, so we come on set and we just have a great time. We continuously laugh. ‘Attack' is an action-heavy film so there is a lot of hard work going into it," said Jacqueline Fernandez. John Abraham Sheds 15 Kgs For His 'Lean Is Mean' Double Role in Satyamaev Jayate 2!

Attack is written by Lakshya Raj Anand and produced by Dheeraj Wadhawan, Ajay Kapoor and John Abraham. The film features also features Rakul Preet Singh in the key roles. The film is scheduled for release on Independence Day weekend this year. Apart from this, John also has Milap Zaveri's directorial Satyameva Jayate 2 alongside Manoj Bajpayee and Divya Khosla Kumar. He also has Mumbai Saga and Ek Villain 2 alongside Arjun Kapoor and Tara Sutaria.

(The above story first appeared on LatestLY on Feb 16, 2021 09:18 AM IST. For more news and updates on politics, world, sports, entertainment and lifestyle, log on to our website latestly.com).