Ayushmann Khurrana may gear up to play the role of a police officer once again in the Hindi remake of Tamil hit, Ratsasan. 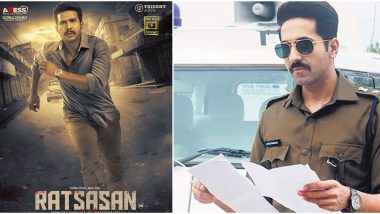 Ayushmann Khurrana is busy hunting for right scripts these days and seems like he has already finalised one. After delivering three consecutive hits in Article 15, Bala and Dream Girl, Mr Khurrana is probably gearing up to play a police officer yet another time and this time in a Hindi remake. If a report in Indian Express is to believe, the Andhadhun actor has been approached to step into Vishnu Vishal's shoes for the remake of his 2018 release, Ratsasan. The movie is essentially a thriller where Ayushmann will play a cop who's hunting a serial killer. Has Ayushmann Khurrana Signed a Romantic Comedy With Dharma Productions? More Details Inside!

While the official confirmation is yet to come, the same report suggests that the actor is already on board for it. Post the success of Article 15 and even bagging his Best Actor trophy for same, there's no reason why Khurrana should deny a script that demands him to wear a khaki uniform once again. The Tamil movie recently made headlines when its similarities were drawn in Rani Mukerji's Mardaani 2. While the actress has denied seeking any inspiration, its official remake should ideally solve all your queries.

Ayushmann currently has two major releases in his kitty. He'll open 2020 with Shubh Mangal Zyada Saavdhan - which is a same-sex love story and later, Gulabo Sitabo that sees him sharing the screen space with Amitabh Bachchan. Guess, the actor sure knows the taste of his audiences and his recent winning streak is proof of that.

(The above story first appeared on LatestLY on Dec 11, 2019 04:39 PM IST. For more news and updates on politics, world, sports, entertainment and lifestyle, log on to our website latestly.com).