The Narcotics Control Bureau (NCB) on Wednesday refuted claims about clean chit given to Bollywood divas Deepika Padukone, Shraddha Kapoor, Sara Ali Khan and others questioned in connection with the a drugs case surrounding the death Sushant Singh Rajput, saying such reports are "devoid" of "truth and facts". 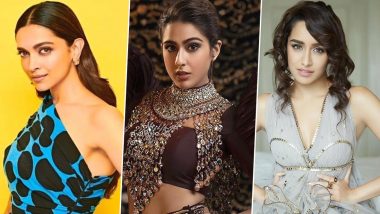 The Narcotics Control Bureau (NCB) on Wednesday refuted claims about clean chit given to Bollywood divas Deepika Padukone, Shraddha Kapoor, Sara Ali Khan and others questioned in connection with the a drugs case surrounding the death Sushant Singh Rajput, saying such reports are "devoid" of "truth and facts". "The news article mentioning that the drugs law enforcement agency giviing clean chit to those examined by NCB is devoid of the facts and truth." He said that the necessary "rebuttal" is being issued to the concerned. Bollywood Drug Probe: NCB Chief Rakesh Asthana Arrives in Mumbai, Briefed About Latest Developments

The remarks came after a media report claimed that the NCB has given clean chit to Deepika, her former manager Karishma Prakash, Sara, Shraddha and others in a drugs related case. Ther NCB questioned Deepika, Shraddha and Karishma on Saturday in Mumbai for several hours over their alleged chats discussing drugs. The NCB also questioned Sara, who starred with Sushant in "Kedarnath" for over five hours in the case on Saturday. NCB Says No Link Between Drug Probe and Karan Johar’s July 2019 Party

Deepika is the daughter of badminton icon Prakash Padukone and married to actor Ranveer Singh, while Shraddha is daughter of veteran actor Shakti Kapoor. Sara is daughter of actors Saif Ali Khan and Amrita Singh. The NCB also grilled actor Rakul Preet Singh in connection with its probe on Friday for four hours. However, the officials of the NCB have remained tightlipped on its findings after the questioning of these actors in the case as it is corroborating the statements of all the people questioned in the case so far.

The NCB also arrested Kshitij Ravi Prasad former executive Producer of the Dharma Productions in connection with the case after it was found that he procured drugs for over a dozen times between May to July and paid Rs 3,500 for every 50 gm of the contraband. The NCB has already arrested Sushant's girlfriend Rhea Chakraborty, her brother Showik, the late actor's house manager Samuel Miranda, personal staff Dipesh Sawant in the case along with 16 other accused.

The NCB registered a case after it received a request from Enforcement Directorate (ED) following the alleged chats discussing drugs came to the fore. The NCB registered two cases and Sara and Shraddha are inter linked in both of the cases. Besides NCB, the CBI and the ED are also probing the death of Sushant, who was found dead in his Bandra's Mont Blanc apartment on June 14.

(The above story first appeared on LatestLY on Sep 30, 2020 02:30 PM IST. For more news and updates on politics, world, sports, entertainment and lifestyle, log on to our website latestly.com).