Boman Irani in his recent conversation revealed he had suggested Irrfan Khan's name for a very important character in Rajkumar Hirani's 3 Idiots. 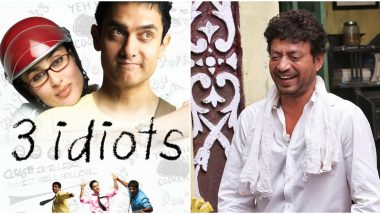 Irrfan Khan could have played this character in 3 Idiots (Photo Credits: Instagram)

Irrfan Khan's sad demise has left a huge void in our hearts. The talented actor was recognised internationally and his acting brilliance was unmatched. His sudden demise did shatter one and all from the industry but his beautiful memories will be etched in our hearts forever. While we keep hearing about the probable future projects that could have starred him, Boman Irani wanted Rajkumar Hirani to offer him, 3 Idiots. Yes, Irani wanted Khan to be a part of Hirani's 2009 release and had even suggested his name to the filmmaker. But things didn't work out for obvious reasons. Irrfan Khan Was Supposed to Play Ranbir Kapoor's Father in Jagga Jasoos and Suggested the Idea for Metro Sequel, Reveals Director Anurag Basu.

In his recent interaction with Bollywood Hungama, Boman Irani recalled how he wanted Irrfan to play Virus' character in 3 Idiots. No, we aren't kidding. He always wanted the actor to play the role that was offered to him and the reason for which was valid enough.

To explain his thought process, Irani recalled how his characters in Munnabhai MBBS and 3 Idiots were more or less very similar. While his mannerisms were different in both the characters, their character arcs had many similarities and this had worried Irani. When he discussed his issues with the filmmaker, he suggested Irrfan's name as his replacement simply cos the actor excelled in everything he touched. But Hirani had his own vision and insisted Boman continue with his role. Rest as they say is history. Irrfan Khan to Get a Locality Named After Him in Igatpuri; Villagers Mourn his Sudden Demise and Remember all the Noble Work He Did For Them.

Check out His Conversation

"I said take #IrrfanKhan for #3Idiots. He (@RajkumarHirani) asked why, I said he'll be superb in the role (of Virus) because wo har cheez superb karta hai. And then...": @bomanirani#TalkingFilms #BollywoodHungama

Though Irrfan was a brilliant actor but imagining him as Virus and Kareena's father sounds a bit unconvincing. No wonder Hirani didn't approve of it.

(The above story first appeared on LatestLY on May 18, 2020 10:04 PM IST. For more news and updates on politics, world, sports, entertainment and lifestyle, log on to our website latestly.com).