Sushant's ex-girlfriend Ankita Lokhande, who has openly declared her support for Sushant's family reacted to the news of a CBI enquiry being initiated into the actor's death. 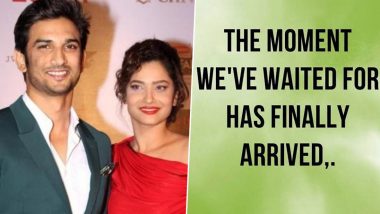 After more than a month and a half of actor Sushant Singh Rajput's suicide on June 14 and countless fans demanding for a CBI probe into the actor's death investigation, the Centre on Wednesday (August 5) told the Supreme Court that they have agreed to the recommendation of Bihar Government and handed over the enquiry into the actor's death to the Central Bureau of Investigation. Its a win for all those who blamed Mumbai Police for shoddy investigation and wanted the CBI to take over. Sushant Singh Rajput Death Probe: Actor's Sister Shweta Singh Kirti Expresses Relief as Case Transferred to CBI.

And now, Sushant's ex-girlfriend Ankita Lokhande, who has openly declared her support for Sushant's family reacted to the news of a CBI enquiry being initiated into the actor's death. Did Ankita Lokhande Show Her Support To Sushant Singh Rajput's Father For Filing FIR Against Rhea Chakraborty in Her Cryptic Post?.

In fact, the day after Sushant Singh Rajput's father KK Singh had filed an FIR with Patna police against Rhea, Ankita had posted "TRUTH WINS" on Instagram. A while back Sushant's sister also reacted to the news. Ankita in her previous interview with Republic had revealed about why she did not attend SSR's funeral but went to meet his family after the late actor's last rites.

(The above story first appeared on LatestLY on Aug 05, 2020 02:37 PM IST. For more news and updates on politics, world, sports, entertainment and lifestyle, log on to our website latestly.com).