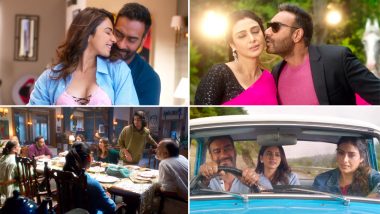 After seeing the quirky first look of De De Pyaar De starring Ajay Devgn, Tabu and Rakul Preet Singh, we are more than excited to see what's in store for us as the trailer has released today. It is certainly special since today also happens to be actor Ajay Devgn's birthday. In the first look poster of the film, Ajay Devgn was seen sitting with his feet stretched between two cars as Tabu and Rakul Preet each sat on one. The film is expected to be a breezy entertainer. The movie derives its name from the popular song featuring Amitabh Bachchan from the film Sharaabi.

The film is expected to be a fun ride and we are excited to see Ajay Devgn share screen space with Rakul Preet Singh for the first time. Tabu and Ajay Devgn, on the other hand, go way back. From starring in Vijaypath in the 90s to the recent Golmaal Again, the duo are known to be good friends off-screen too. De De Pyaar De First Look: Ajay Devgn, Tabu and Rakul Preet Are All Set to take You on a Ride on May 17!

In the trailer, we see Ajay Devgn's character as a charming Casanova. The chemistry between him and Rakul Preet Singh too looks impressive and considering this is the first time the duo are coming together for a film, this palpable chemistry is quite impressive. In the three-minute long trailer, we see Tabu make an entry quite late but incredibly stylish. In the supporting cast, we see Aloknath and Jimmy Shergill in some interesting roles.

The film has been directed by Akiv Ali. A release date of the film is yet to be announced. In terms of his other projects, Ajay Devgn is probably the busiest actors this year. He has six other films in the pipeline such as Taanaji, biopics on Chanakya and former football manager, Syed Abdul Rahim. He has also signed a film with Ranbir Kapoor which will be helmed by the Pyaar Ka Punchnama director Luv Ranjan. If Bollywood is any less, the actor also has a cameo in SS Rajamouli's RRR. Ajay Devgn Birthday Special: With a Biopic, a Historical Drama and even a Rom-Com, He has the Most Versatile Upcoming Filmography.

Well, from the looks of the trailer of De De Pyaar De, it sure seems like Ajay Devgn is set to leave his fans impressed this year. What do you think about the trailer, tell us in comments below!

(The above story first appeared on LatestLY on Apr 02, 2019 12:42 PM IST. For more news and updates on politics, world, sports, entertainment and lifestyle, log on to our website latestly.com).