Deepika Padukone is turning 34 on January 5, 2021. After a very tumultuous 2020, let's wish her a glorious and pleasant year ahead while also wishing her Many Many Happy Returns of the Day. 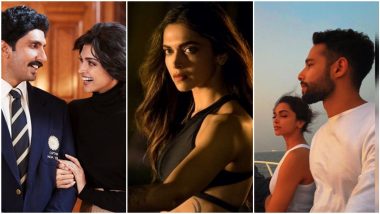 Deepika Padukone is turning 35 on January 5, 2021. After a very tumultuous 2020, let's wish her a glorious and pleasant year ahead while also wishing her Many Many Happy Returns of the Day. Deepika Padukone is one of the most popular stars we have in Bollywood right now. Making her debut in 2007 with Om Shanti Om, Deepika started off on a very successful note (she was a very popular supermodel before) and then earned more successes in films like Bachna Ae Haseeno, Cocktail, Chennai Express, Housefull, Goliyon Ki Raasleela... Ram Leela, Bajirao Mastani. Piku, Padmaavat at al. The Rs 300 crore Padmaavat, directed by Sanjay Leela Bhansali, is her highest grossing movie to date. Deepika Padukone Birthday: 7 Performances That Made Her The Indestructible Star She Is Today.

In 2020, we only saw her in one movie -  Meghna Gulzar's Chhapaak, where she played an acid attack survivor. The film was an average grosser and was shrouded in controversies over Deepika's JNU visit. Deepika fans would be quite excited for her future projects, for there are some big ones in the offing. Let's look at some of her movies that will grace our screens soon.

The film which showcases the Indian cricket team's emphatic 1983 World Cup win was supposed to come out in 2020, but got delayed to this year due to the pandemic. Deepika's hubby Ranveer Singh plays Kapil Dev, while Deepika plays Romi Dev, Kapil's spouse. She is also one of the producers of the film. Directed by Kabir Khan, '83 features an ensemble cast including Pankaj Tripathi and Jiiva.

Shakun Batra, of Kapoor & Sons fame, will be directing another Dharma movie, this time featuring Deepika in the lead, along with Ananya Panday and Siddhant Chaturvedi. The release date has not been confirmed yet. #HappyBirthdayDeepikaPadukone Trends On Twitter As Fans Wish Bollywood’s Queen On Her 35th Birthday!

Deepika is returning to South again with Prabhas' 21st film, that is being directed by Nag Ashwin. Reports cite that she has been paid an astronomical fee for her role in the film. Amitabh Bachchan also has an important role in the movie.

Though there is still no official announcement on this, there is a huge excitement over Deepika reuniting with her OSO and Chennai Express co-star, Shah Rukh Khan. A spy thriller, Pathan is directed by Siddharth Anand for YRF and also features John Abraham in a grey role. There are also reports that Salman Khan will feature in a cameo, reprising his role of Tiger from Tiger Zinda Hai in the film. If everything is fine, Pathan may aim for a Diwali 2021 release.

While Rishi Kapoor's sad demise has left the project in a lurch, it isn't confirmed that The Intern remake has been shelved. Deepika is still associated with the film, stepping into Anne Hathaway's shows, while the producers are still looking for a veteran actor to play Robert De Niro's part.

(The above story first appeared on LatestLY on Jan 05, 2021 01:00 PM IST. For more news and updates on politics, world, sports, entertainment and lifestyle, log on to our website latestly.com).