Digangana Suryavanshi is one of the few actors who have resumed work amid the pandemic. She is back on the sets and has already shot for an ad film, which she says was a strange experience. She is very excited about her upcoming film, Seetimaarr, with Telugu superstar Gopichand. 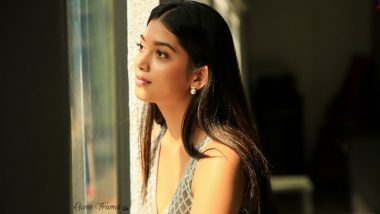 Digangana Suryavanshi is one of the few actors who have resumed work amid the pandemic. She is back on the sets and has already shot for an ad film, which she says was a strange experience. She is very excited about her upcoming film, Seetimaarr, with Telugu superstar Gopichand. Of course, she is excited to be back to work. The actress has been on sets ever since she was a kid, working in a variety of projects. She has cultivated a very strong fan base. You can weigh her stardom with the fact that a toy company launched a doll based on her on her birthday recently. In an interview with LatestLY, she talks about her journey as an artist over the years. Here are the excerpts.

Have you stepped back on the sets? How was your experience?

It was a strange experience to be back on the sets. The one moment that gave me fright was when we were actually doing the show, the actors were the only people on the sets were without a mask.

Initially, it was frustrating, but the show must go on. I feel like the whole economy has been suffering a lot. Every family has an issue, the degree can be less or more. I am trying to keep myself positive and focus on work. Also, I keep in mind that I don't mess up with my health while being excited about being back to work.

You have been acting since you were a kid. Do you think you have missed out on some experience, or if this has made your life more enriching?

Honestly, I don't feel I am at a place to be able to compare my life with anybody else. This has been a regular lifestyle for me. This is my normal. I have not had the opportunity to witness the other side. But, I think I've always been treated as a normal kid with normal restrictions. Irrespective of me being an actor, my family treats me the same ways as I am supposed to be treated as a person.

If I do something wrong, I am told off, as anybody else would be. But, I feel like I am in a place where I've gained a lot more. Of course, there is more judgement from an early age which is not witnessed by everyone. I meet more number of people, who are judging me.

I have been very fortunate that I have my family who has given me the advice that I need when I am disturbed.

Many actors like Hina Khan and Ashnoor Kaur have talked about not being treated fairly by the film industry since they have been associated with TV. Have you been able to break the rut to convince people that this tag doesn't matter?

Very honestly, I am a less complaining person. We all have our ups and downs. We have our own criticism. That's for us to learn from them and learn to ignore them. But in my case, my degree of being grateful, and being happy about the fact that I've gotten the opportunities that I've had, is way more than my struggling bit. Or maybe that's the way I look at it. I can't claim that I don't have a struggle, but maybe I look at it in another way.

I made a conscious decision to do Bigg Boss when I was not even an adult. I was 17 when I got into the house because I wanted people to know me beyond the character I play. Bigg Boss 9 Contestant Digangana Suryavanshi Says Watching Salman Khan’s Reality Show Is Difficult Once You Live in That House.

I was offered so many shows on TV, really tempting money and seemed like the best decision ever. But, I made a conscious decision to wait it out, and gave two hit films, which happened a year and a half later.

I still make the choices I do, they might not be the best choices. But fortunately, I have not come to a place where I am refused to be given something because I am considered a TV actor. I am proud that I've done TV.

I am happy about my transition from TV to films. I've done about 6 six films, and I am shooting for two.

You are going to star in Seeti Maar with Gopichand. How has that experience been?

It is beautiful. He's very very humble. That's the best part. I had a great experience shooting with all of them. Very comfortable.

Tamannaah and I are yet to shoot together.

You play a journalist in the film. Did you, by chance, empathise with us?

Oh my God (laughs). This is a very different kind of journalist. When you set it, you will know that this one is not about the struggle you guys have to go through.

There has been a conversation that not enough meaty roles are written for women in Bollywood. Do you see that pattern or do you think you've broken the rut?

Honestly, to find satisfaction in anything is very difficult for me. But, if I look at it, more reasonably, I've been able to explore fairly, whether it was FryDay or Jalebi. Now, the Hindi film that I am doing is a period drama. It is a war film. The genre is looked upon to. Fortunately, I have it in my kitty.

I am not sure if you've seen Hippy but even in that film, I've had the opportunity to act, to be able to justify my role. I am at the very beginning of my career. You have to give everything a fair chance.

(The above story first appeared on LatestLY on Nov 18, 2020 03:32 PM IST. For more news and updates on politics, world, sports, entertainment and lifestyle, log on to our website latestly.com).