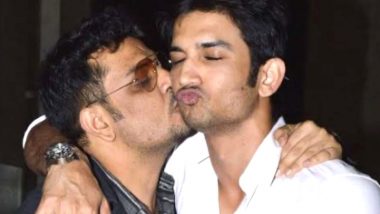 Casting director-turned-filmmaker Mukesh Chhabra says late Bollywood actor Sushant Singh Rajput used to be his stressbuster while shooting "Dil Bechara". Talking about his friendship with Sushant, Mukesh said: "We actually used to always be (each) other's stress buster. Whenever we used to get an opportunity we used to dance and sing on set." Mukesh also opened up about going on bike rides with the late star. Sushant Singh Rajput Dances Along With ‘Detective Byomkesh Bakshy’ Co-Star Swastika Mukherjee in This Throwback Video

He said: "Our film actually has this bike that belongs to Manny (Sushant's character), and it has a sidecar. So, we used to keep singing songs from the movie and take the bike for a spin. The weather in Jamshedpur was unpredictable, and it would suddenly rain. We loved running out in the rain like small kids." Sushant Singh Rajput’s Hometown Purnea Names a Road After Him

"Dil Bechara" is the official remake of the 2014 Hollywood romantic drama "The Fault In Our Stars", based on John Green's popular novel of the same name. Budding actress Sanjana Sanghi stars opposite Sushant in the film. The film will see Saif Ali Khan in a cameo. Composer AR Rahman and lyricist Amitabh Bhattacharya have collaborated to create music for the project. Sushant's last film "Dil Bechara" will premiere on an OTT platform on July 24.

(The above story first appeared on LatestLY on Jul 13, 2020 05:51 PM IST. For more news and updates on politics, world, sports, entertainment and lifestyle, log on to our website latestly.com).