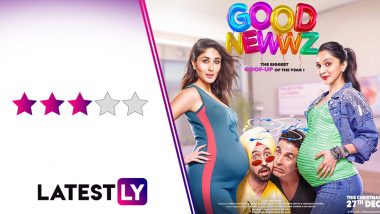 Good Newwz Movie Review: Varun (Akshay Kumar) and Deepu Batra (Kareena Kapoor Khan) are trying to conceive for a baby for some time. While Deepu is putting her best efforts for it to happen, Varun has already adopted a frustrated attitude to the idea of having a kid. On the advice of his sister (Anjana Sukhani), the Batras meet a reputed IVF specialist couple the Joshua (Adil Hussain and Tisca Chopra) to get them pregnant. Good Newwz Song Dil Na Jaaneya: Akshay, Kareena, Diljit and Kiara's Melody Will Make you Want to Hug Your Partner (Watch Video).

The first half that revolves around Deepu and Varun's married life is pretty fun and engaging. Using Kareena Kapoor's classiness, Akshay Kumar's fantastic comic timing and some very smartly written scenes and dialogues, director Raj Mehta makes Good Newwz live up to its misspelt name when it comes to being an entertainer. Many of the young parents or those expecting to be one could relate a lot to some of the scenes in these portions, right from far-off relatives asking when the family is getting bigger to awkward discussions on conception. There are also some funny instances of meta humour in there. Like, how Varun rants about star couples flaunting off their kids on social media, in the presence of Deepu - a naughty wink at how Kareena's detractors criticise her for bringing her kid Taimur in the limelight a bit too much. All the scenes involving Varun and the IVF clinic in the first half are pretty funny too.

Akshay and Kareena's wonderful chemistry also shines here. I wish Good Newwz could really have focused on this couple and their attempts to make a baby, and how the process also manages to heal the flaws in their relationship. Just when I was nurturing that hopeful thought, the movie reminded me that Good Newwz also belonged to the second Batras, Honey (Diljit Dosanjh) and Monika (Kiara Advani).

Even though both the couples are loaded with money, the younger Batras are as different from the older ones as chalk and cheese. If Varun and Deepu are poised and kinda uptight, then Honey and Monika are blingy and rambunctious. In short, we finally realise that this is a Dharma film, where Sardars have to be shown in a caricaturish manner.

The introduction of the second Batras also brings us to the plot conflict of Good Newwz - how the pregnancies get exchanged over a (conveniently convoluted) mixup of sperms. What should have a very fun twist and should have made things even more interesting, instead, dampens both the pace and the energy of the film, despite the infusion of loudness. The caricaturish treatment of these two characters jars with what has been quite a cool, fun even mature tone for the film till then.

I won't blame the actors here; all of them perform exceedingly well. It is the writing and the Bollywoodishness of it all, in how to make the hoity-toity couple hate their Honey Singh-loving counterparts, that are faulty. Their Mumbai-Delhi divide is pointedly emphasised in quite a few scenes. Like, the scene where Monika repeatedly refers 'pani puri' to as 'golgappes'. It should have been done deftly, but here, it feels very on-the-face. Even the humour, that has been the strength of the first half, falters post-interval. Good Newwz: Akshay Kumar Gets Criticised on Twitter for Abusing Lord Rama in the Second Trailer of his Next.

I am particularly concerned that the emotional turmoil in Varun, in rearing a child not of his blood, has not been handled with enough depth. Either those scenes are played for laughs or he gets ostracized for being an unsupportive spouse. It also raises a debate on whether how much say a man, whose contribution ends with an orgasmic grunt, should have when it comes deciding pregnancy. But those scenes lack heart. You can't really blame Varun for having a laid-back attitude towards a kid that is not his. Yes, he does tend to goof off occasionally, but the character always comes across as supportive, even when his wife decides to keep the baby without his say. Also, why does the film need to look down so much on IVF treatments, when it has proved to be a blessing for many real-life couples?

Watch The Trailer of Good Newwz:

Thankfully, the emotional scenes, even if they follow a predictable route, bring some depth back, and gives the film a nice, heartwarming ending.

Time and again, Akshay Kumar is proving himself to be one of the most consistently funny actors in Bollywood these days. His comic timing is impeccable and the actor walks off with the wittiest lines and scenes. I would have Akshay do more films like Good Newwz, rather than being stuck back in misogynistic fare like Housefull 4.

Kareena Kapoor Khan has a more serious role, but the actress brings a lot of class and the right amount of attitude to her performance. She makes us feel for her character's emotional stress, and her yearning for a more supportive husband.

Diljit Dosanjh has a very likeable presence and the actor pitches in a very confident act. My only concern with him is that in his Bollywood debut, Udta Punjab, Diljit took on a role that pummelled every stereotype about how his religion is portrayed in Bollywood films. In Good Newwz, unfortunately, we are back to square one.

The lovely Kiara Advani continues her fine recent form. She is particularly good in the scene where Deepu invites them to her flat, and also in the climax. Adil Hussain and Tisca Chopra lend wonderful support to the lead actors.

- The Sparkling First Half

- The Caricaturish Presentation of Diljit and Kiara's Characters

- The Weak Second Half

- The Drag in the Middle Portions

Good Newwz comes across as a sweet, feel-good entertainer with sparkling performances from Akshay Kumar and Kareena Kapoor. If a little more effort and realism was taken in writing post-interval scenes, then this could have been the Best Newwz of the month for Bollywood fans.

(The above story first appeared on LatestLY on Dec 26, 2019 12:53 AM IST. For more news and updates on politics, world, sports, entertainment and lifestyle, log on to our website latestly.com).