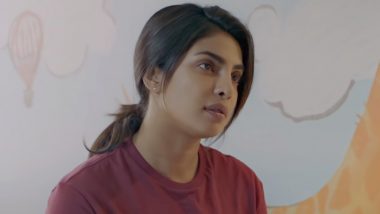 Priyanka Chopra and Farhan Akhtar's upcoming film, The Sky Is Pink recently premiered at the Toronto International Film Festival and it has been winning a lot of praises. We hear, the film also received a four-minute standing ovation and the emotional drama seems to have struck a chord with the audiences. Critics have given a positive response to the film and hailed Priyanka for her moving act in the film.  The Sky Is Pink Review From TIFF 2019: Priyanka Chopra Jonas And Farhan Akhtar's Film Is Bound To Hit You Hard.

Directed by Shonali Bose, The Sky Is Pink revolves around a family that powers through some of the toughest moments together, it is a romantic drama that has Priyanka and Farhan as the couple around which the story is centred. It also stars Zaira Wasim and Rohit Saraf in lead roles. The trailer was enough proof that Priyanka has aced her character of Aditi Chaudhary but director Shonali Bose recently opened up in an interview with Mumbai Mirror to share one of the most emotional moments on the sets of the film.

In the film, Priyanka's son is named Ishaan, which is the same as director Shonali Bose's late son. The director lost her son nine years ago in a tragic incident. The director recalled how she used to affectionately call her son "Ishlu" and during one of the sequences in the film, PC wanted to honour his memory an, “Can I call him Ishlu in this scene?”. Shonali said, "I just smiled from ear to ear."

Not just this, the director also spoke about an incident when Priyanka broke down on the sets. She said, "Another emotional shoot was when she had to break down after a scene. After I called “cut”, I hugged her and she couldn’t stop crying. She kept whispering, “I’m so sorry, I’m so sorry. I know now what it means to lose a child. I am so sorry for Ishlu.” I continued holding her."Priyanka Chopra Could Have Been a Part of Ayushmann Khurrana's Dream Girl - Here's How.

We have to say all these off-screen emotions seem to have translated on-screen too. The film is expected to strike a chord with the Indian audiences well. The film is all set to release in October 2019.

(The above story first appeared on LatestLY on Sep 16, 2019 09:32 AM IST. For more news and updates on politics, world, sports, entertainment and lifestyle, log on to our website latestly.com).