“It Was Hot, Honest and I Loved Every Bit of It”, Malaika Arora Hints at Arjun Kapoor’s Koffee With Karan 6 Episode – Watch Video 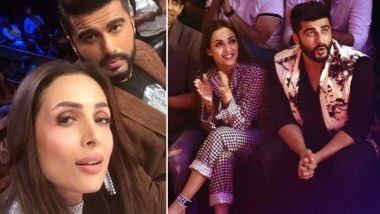 Arjun Kapoor straightaway confessed on Koffee With Karan 6 last night that he is NOT single. He also made a startling statement where he said that he is ready to get married. With his frequent, cozy appearances with Malaika Arora, it wouldn't be hard to guess that he was hinting at his relationship with her. Now, Karan Johar happened to ask Malaika about how was "her cuppa coffee last night" hinting at last night's episode of KWK. To which, she had a spot on reply! "It was hot, honest and I loved every bit of it!" said Malaika! Clearly, she is more than happy to see Arjun finally professing his love for her to the world. The couple had been dating since quite some time and reports suggested how Malaika wanted to make it official, but it was Arjun who was hesitating to do so. However, like the actor said on the show that in the last six months, his perspective of looking at the relationship has changed and that he is looking at a more "serious" aspect of it. Well, we couldn't be any happier for the lovebirds! Koffee with Karan 6: Arjun Kapoor Says He Is Ready to Get Married! Is Malaika Arora Listening?

Check out the video below-

And we are back!!!! Battle of the greens! @kirronkhermp @malaikaarorakhanofficial #toodles

On the show, Karan Johar asked Arjun if he'd introduce his partner to his family, to which he replied, "Clearly, it has just happened." He also asked if Arjun is open to marriage. "Yes, now I am. Earlier, I wasn’t," Arjun said. We totally love how Arjun and Malaika are going all out with their romance!

(The above story first appeared on LatestLY on Nov 26, 2018 03:14 PM IST. For more news and updates on politics, world, sports, entertainment and lifestyle, log on to our website latestly.com).