Jaya Bachchan Birthday Special: 10 Performances By The Brilliant Actress That Prove Why We Are Lucky To Have Her 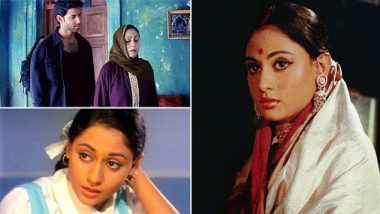 These days, unfortunately, all people talk about Jaya Bachchan are those viral videos of her shunning, schooling or slamming media. It is a pity because Jaya Bachchan is one of the best performers Indian Cinema has ever seen. She had this very likable petite girl-next-door charm that was impossible to ignore when she was actively acting in movies. Although she tried to break away from the mold of the middle-class characters she was playing with movies like Jawani Diwani, she gained more popularity and awards for being this coy yet determined woman in movies that are relatable. Did You Know Jaya Bachchan Was to Play Swami Vivekananda in a Bengali Film?  Amitabh Bachchan’s Throwback Thursday Post Reveals So!

Today on her birthday, we would like to tell you just why we keep wishing for a comeback by Jaya Bachchan in a movie. She is simply a fantastic actress and Bollywood needs good performers.

This was her debut Hindi movie but who can tell. Guess being a Gold Medalist in acting from the Film And Television Institue Of India gives you that kind of confidence in front of the camera. Here she is obsessed with her on-screen idol Dharmendra and perfectly projects the smitten Guddi. Do check out this movie to know the kind of range this actress showed in her first movie.

The movie was as real as middle-class life in Mumbai can be. Bachchan played a small-town girl who gets married into a big city and how she adjusts to it. She fit like a hand in glove in this film.

This movie is not for weak-hearted, so if you are thinking of watching this after reading the list, do make sure you have an ample supply of tissues. Bachchan and Sanjeev Kumar played a deaf and mute couple and the hardships they go through because of their disability. Jaya Bachchan's tears will make you cry buckets!

She tried something new, played the calculative crook faking amnesia to rob Sanjeev Kapoor. A negative character for Jaya Bachchan was a new world and she did it smartly, without losing her signature charm of being sweet and coy.

The movie has been talked about a lot for apparently documenting the unrest in Jaya and Amitabh Bachchan's marriage. It was really brave of the couple to make a movie on the same and it proved why Jaya Bachchan is the more meritorious of the two.

Kora Kagaz had a simple narrative - boy and girl meet, like each other, get married, the boy has a modest income, gets berated for this from the girl's family, that breaks the marriage. Many years later, they resolve their differences and reunite. Jaya Bachchan's performance as the woman trying to make her husband believe in her love for him will break your heart.

Jaya Bachchan played house-help Geeta in the film and walked away with the Best Actress Filmfare award for her amazing performance.

Jaya Bachchan had returned to Cinema after a sabbatical in a role that is still seen as one of her more powerful roles. Bachchan played the mother of a Naxalite who dies when he is killed by a mob. The pain and anguish she feels when she realizes that her scholarly son had hidden this side from her is extremely potent.

Her roles got more sporadic after that and then she returned to the big screen with Fiza. Many remember this movie for Karisma Kapoor's brave acting and Hrithik's innocent portrayal of a wayward Indian youth. But it gets its edge from Jaya Bachchan's heart-rendering act of a mother who lost her young son not to death but to the aftermath of communal tension. This will make you cry!

There's a scene in the film where Jaya Bachchan follows her intuition and comes face to face with her adopted son Shah Rukh Khan in a mall in London. There's no dialogue in the scene and yet, that's the best mother-son reunion we have ever seen!

(The above story first appeared on LatestLY on Apr 09, 2020 08:00 AM IST. For more news and updates on politics, world, sports, entertainment and lifestyle, log on to our website latestly.com).