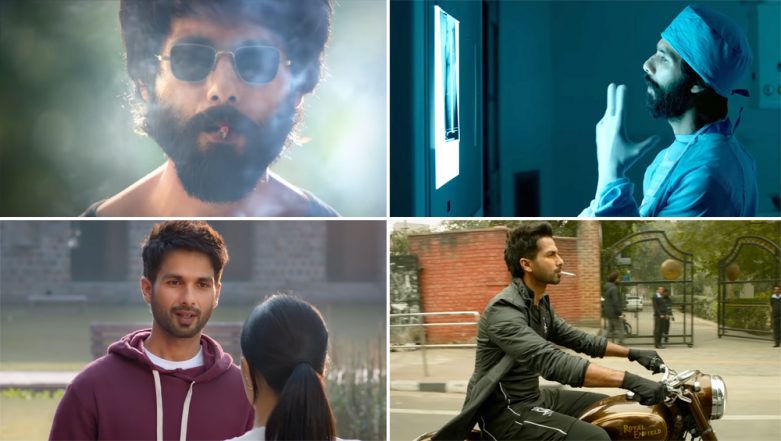 Shahid Kapoor’s much-awaited upcoming flick Kabir Singh has been making quite a buzz. The teaser is out now and it has the actor playing every bit a bad boy like Vijay Deverakonda did in Arjun Reddy, the original South superhit which Kabir Singh is based on. Shahid has evolved from the chocolatey hero to the handsome hunk of Bollywood, and with every passing film, his popularity has only seen an upward graph. Kabir Singh stars Kiara Advani as the female lead and her appearance is also impressive. Kabir Singh Teaser Poster: Shahid Kapoor, Shrouded in Darkness and Smoke, is Heading Towards Self-Destruction - View Pic

In the trailer, we see a brash Shahid Kapoor who's fallen deep into the web of alcoholism. Much of the teaser focuses on his angsty not-give-a-damn attitude. In one of the scenes, we see Kabir Singh's doctor avatar. If you have seen the original film, Arjun Reddy, you can spot the similarities easily. Towards the end of the teaser, Kiara Advani makes an appearance. She looks shy and docile while Shahid's character plants a kiss on her cheek, well let's just hope it is consensual.

Have a look at the teaser here:

Kabir Singh is a remake of the Telugu blockbuster Arjun Reddy. Starring Vijay Deverakonda, it was released in 2017. The makers of the Shahid starrer recently revealed the teaser poster and it was widely applauded on the social cloud. According to the reports, Shahid will be essaying the role of an alcoholic surgeon. The story revolves around a man who goes into a self-destructive path after his ex marries someone else. Shahid Kapoor is 'Happy Happy' on the Sets of Kabir Singh - See Pic.

Helmed by Sandeep Vanga, the movie is bankrolled by T-Series. Kabir Singh is slated to hit the theatres in June this year. Stay tuned for the latest updates from your favourite celebrities.