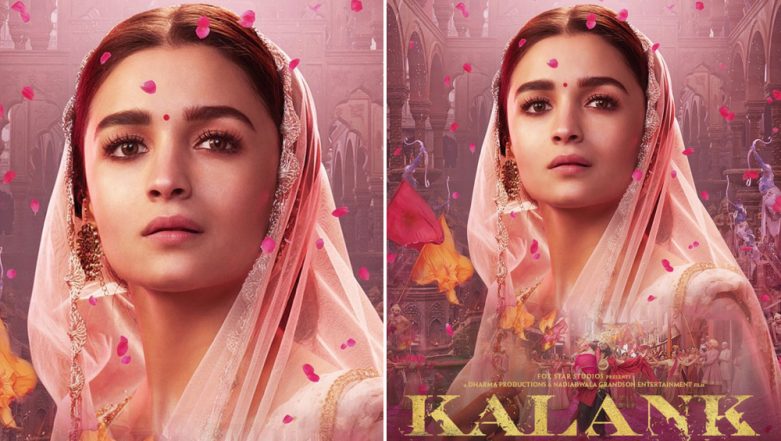 The makers of Kalank has released a beautiful poster featuring the birthday girl, Alia Bhatt. The gorgeous actress who is essaying the role of Roop in the upcoming period drama, looks breathtakingly beautiful in this latest poster of Kalank. Her feisty ‘roop’ is something we all are looking forward to see on the big screens, in the magnum opus directed by Abhishek Varman. Alia Bhatt’s Mom Soni Razdan Says Kalank Teaser Is Like a Sanjay Leela Bhansali Film! Karan Johar, Are You Listening?

Today it is Alia Bhatt’s birthday and the makers have made the actress’ fans happy by releasing another beautiful look of her from the film. We really cannot take our eyes off from Alia’s royal look. The mix of innocence and the courage in her eyes, makes her look even more beautiful. Raazi, Baahubali, Dedh Ishqiya - Varun Dhawan-Alia Bhatt’s Period Drama Kalank, Takes Us Back to These 5 Films.

Take a look at Alia Bhatt as Roop from Kalank:

Courage has never looked this beautiful!❤️

Kalank which is set in the pre-independent India, is a tale of a royal family and their untold stories. The truth starts unfolding as the partition nears. Alia Bhatt’ and Varun Dhawan’s (Zafar) undying love, we’ve seen it already in the teaser. The film also stars Aditya Roy Kapur, Sonakshi Sinha, Sanjay Dutt and Madhuri Dixit Nene in the lead roles. The film is special to Karan Johar as it was one of the last projects which his father Yash Johar had worked upon. The film is set to release on April 17, 2019.