Manikarnika: After Nepotism, Kangana Ranaut Uses Sexism Card to Attack Sonu Sood for Walking Out of the Film 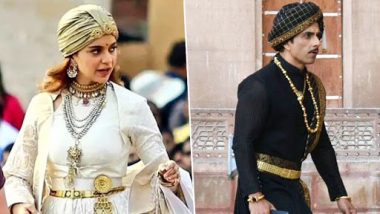 Kangana Ranaut's much-awaited period drama Manikarnika: The Queen of Jhansi has been making headlines for quite a while now.  From whether or not Kangana taking over the directorial reins of Manikarnika to Sonu Sood storming out of the film owing to differences with Kangana, the film has been in the news for all the wrong reasons. Just a while ago, a report in Bollywood Hungama suggested that Sonu, who was playing the role of Sadashiv Narain Rao in the period drama, has quit following a showdown with Kangana.

Now, confirming the news, the actress, in a statement to Pinkvilla, said, "Sonu and I haven't even met since the last shot with Krish (director) last year. He is busy filming Simmba. He couldn't even give us tentative dates to match combinations with other actors. The producers showed him the film and writers narrated the patchwork to him...he refused to meet me ...he vehemently denied to work under a woman director..... which is kind of amusing because Sonu is a dear friend and I have even launched the music of a film that he produced on his request..... even though the team suggested that they have full faith in me, it seems, Sonu had neither dates nor faith."

Denying the reports that suggest Sonu has quit because of Kangana, the actress further added, "And when I last spoke to him he suggested that I can go ahead with someone else and when I narrated the script to Zeeshan Ayyub he called the studio and gave the dates. By that time it was too late as Zeeshan gave me dates for September. Now I hear I had a showdown with him..... when I never met him, never directed him ..... when did I have this showdown?"

The film also made headlines when a picture from the sets surfaced online, which featured a clapperboard which read Kangana Ranaut is the director of the film. It led to a huge confusion. , surfaced online. Post this, her fans were curious to know whether Kangana is directing the film. Giving a clarification, the actress told the online portal, "One more thing I never asked anyone to put my name on clapboard it’s AD’s business .... person on the floor is in charge, is answerable for many things that must have been the idea but constant attacks while I am going through a difficult phase is not acceptable ..." Hoping to put all this behind, Kangana says, "I am just a slave in Manikarnika's hands I am doing this only for her ..... I have made it clear to everyone"

The actress also revealed that Sonu decided to incorporate a few Kushti scenes which weren't in the script earlier. Talking about it, she said, "He himself wrote his scenes of Kushti...like Dangal...which were never in the script. He and director shot a lot of stuff which was never in the script and writers discarded those. is it my fault? Am I writing the film? He wanted the producers to retain the kushti portions as he made the body for it for 4 months. How did I know that is happening behind my back. When writers saw the film they said they don't want it."

Helmed by Krish Jagarlamudi, Kangana Ranaut's Manikarnika: The Queen of Jhansi is slated to release on January 25, 2019. Interestingly, the film is clashing with Hrithik Roshan starrer Super 30. Their clash at the box office makes audience wonder, who will perform better at the ticket windows. The period drama will see Kangana essay the role of a warrior Queen Jhansi; the actress underwent hardcore physical training for the same. Watch this space for further updates.

(The above story first appeared on LatestLY on Aug 31, 2018 03:08 PM IST. For more news and updates on politics, world, sports, entertainment and lifestyle, log on to our website latestly.com).