Is Kangana Ranaut the Reason Why Sonu Sood Walked Out of Manikarnika: The Queen of Jhansi? 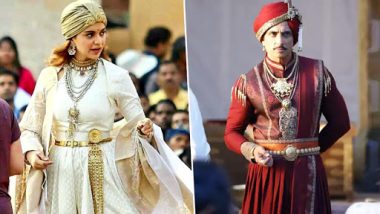 Kangana Ranaut's Manikarnika: The Queen of Jhansi is slated to release on January 25, 2019. (Photo Credit: Instagram)

Kangana Ranaut, who will be next seen in her first period drama Manikarnika: The Queen of Jhansi, has been in the news for all the wrongs. Earlier this week, reports of Kangana taking over the directorial reins of Manikarnika were doing the rounds. Therefore, several ugly stories have surfaced from the locations and sets of the film. Now, the latest we hear is that Sonu Sood, who had been roped in to play the role of Sadashiv Narain Rao in the period drama, has walked out of the film owing to the differences with his co-star. Reportedly, the actor has stormed out of Kangana starrer due to her alleged tantrums on the sets. Looks like, the project is likely to get delayed.

Talking about Kangana and Sonu's tiff, a source from the sets of the film, in a statement to Bollywood Hungama, said, "Yes, Sonu has left the film. He is no longer a part of Manikarnika. And he has informed the film’s producers of his decision. He took a lot of crap from a person who feels she knows how to direct a film without any real qualification to do so. But finally when Kangana Ranaut officially took over the direction, Sonu could take it no more. He quit the film."

Recently, a picture from the sets, that featured a clapperboard which read Kangana Ranaut is the director of the film, surfaced online. Post this, her fans were curious to know whether Kangana is directing the film. However, Kangana's official spokesperson gave a clarification about the same. In a statement to DNA, the spokesperson said, "There is no truth in rumours of miff between Kangana and Krish Jagarlamudi . The clapboard is used only to avoid any confusion on the sets and there should not be much made out of the same. In Hollywood it is a common practice for actors to also step in the shoes of the director if the situation demands. For example, in the hit series 'Friends' 10 episodes were directed by David Schwimmer who played Ross, despite the original director James Burrows being present."

Helmed by Krish Jagarlamudi, Kangana Ranaut's Manikarnika: The Queen of Jhansi is slated to release on January 25, 2019. Interestingly, the film is clashing with Hrithik Roshan starrer Super 30. Their clash at the box office makes audience wonder, who will perform better at the ticket windows. The period drama will see Kangana essay the role of a warrior Queen Jhansi; the actress underwent hardcore physical training for the same. Watch this space for further updates.

(The above story first appeared on LatestLY on Aug 31, 2018 12:44 PM IST. For more news and updates on politics, world, sports, entertainment and lifestyle, log on to our website latestly.com).