Ajay Devgn and Shah Rukh Khan were the original choices of Karan Arjun is something we all know. But a Twitter user claims that they even shot for a poster. All that happened before Salman Khan stepped in. 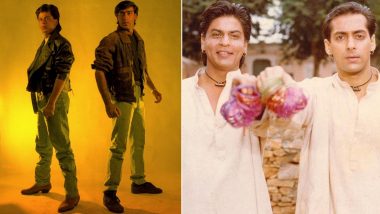 It's a well-known fact that Shah Rukh Khan and Ajay Devgn were the original choices for Karan Arjun. Director Rakesh Roshan confirmed the same during an interview. He had said, "The original choice of actors was Shah Rukh Khan and Ajay Devgn. But they were not happy with their respective parts and wanted to switch. So Shah Rukh wanted to play Karan while Ajay desired to essay Arjun. However, I refused to do so. Hence, they both backed out of the film. Basically, they were not convinced with the story and the reincarnation element. Not just them, most people I narrated the story to were not convinced." But then a Twitter user claimed that SRK and Ajay actually did a poster shoot for the film. Turns out the person isn't wrong. Salman Khan and Shah Rukh Khan’s Karan Arjun Pairing Almost Did Not Happen Because of This Reason

A Better India article that Ajay and SRK did shoot for the poster of Karan Arjun in a Foto Studio. The picture has Ajay and Shah Rukh with their backs to each other with lights all around them. SRK is wearing a black leather jacket over his denim while Ajay looks casual in his attire. It could have been that one film which both did together but guess it wasn't supposed to happen. 25 Years of Karan Arjun: Salman Khan Calls His Movie With Shah Rukh Khan a Special Film with Beautiful Memories

Salman Khan obviously replaced Ajay later. Roshan had said that he approached Aamir and Salman later and both were excited about this. But Aamir had date issues so he couldn't accommodate the film. Later when SRK learned about Salman and Aamir's interest in the film, he returned to the movie.

(The above story first appeared on LatestLY on Jul 09, 2021 06:45 PM IST. For more news and updates on politics, world, sports, entertainment and lifestyle, log on to our website latestly.com).