Reports surfaced earlier that Kareena Kapoor is pregnant with her second child. Confirming the news, Kareena and her husband Saif Ali Khan have shared a statement through their representatives. 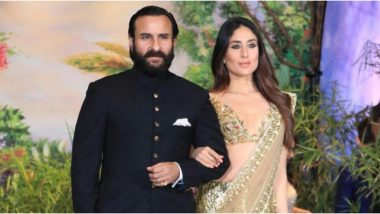 Reports surfaced earlier that Kareena Kapoor is pregnant with her second child. Confirming the news, Kareena and her husband Saif Ali Khan have shared a statement through their representatives. "We are very pleased to announce that we are expecting an addition to our family!! Thank you to all our well-wishers for all their love and support," the short statement read. Kareena and Saif's first son Taimur is already a star, who gets papped more than many Bollywood celebs. The fans of the power couple of Bollywood will be joyous with another Khan baby. Saif Ali Khan Turns Photographer For Kareena Kapoor For The August 2020 Edition Of Filmfare.

Kareena only recently joined social media. The actress is yet to share any update about the same on her Instagram page. In fact, she has wished her Saif's daughter Sara Ali Khan on her birthday with a throwback picture. Kareena's display picture is of herself when she was a kid. Now, all that's left on her Insta is a pic with her baby bump.

Kareena was one of the first mainstream actresses who did not go away from fan and media flare due to pregnancy. She flaunted her baby bump when she was pregnant with Taimur. She shot for ads. Walked the runway of Lakme Fashion Week. Appeared on Koffee with Karan. All while she was heavily pregnant. We are looking forward to the actress doing the same again.

Kareena will be next seen in the Aamir Khan film, Laal Singh Chadha. As per reports, most of the principal photography of the film is complete but the release was delayed to 2021 due to the ongoing pandemic. Kareena will also star in Karan Johar's next Takht. Interestingly, Kareena's last released film, Good Newwz, was about pregnancy where she appeared with a baby bump for the most part of the film.

(The above story first appeared on LatestLY on Aug 12, 2020 04:36 PM IST. For more news and updates on politics, world, sports, entertainment and lifestyle, log on to our website latestly.com).