In the presence of Chief Minister of Uttar Pradesh Yogi Adityanath inaugurated the Lata Mangeshkar Chowk in Ayodhya with a virtual address from Prime Minister Modi and the presence of Union Minister G.Kishan Reddy. 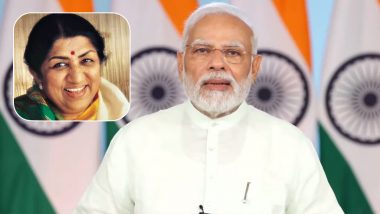 Lata Mangeshkar, PM Narendra Modi (Photo Credits: Twitter)
On the Bharat Ratna recipient’s 93rd birth anniversary, the nation remembers Late Lata Mangeshkar. She sang 50,000 songs in 14 languages in 75 years. She was the most celebrated voice who brought life to music and lyrics. Today, Prime Minister Narender Modi also paid tribute to the ‘Nightingale of India’ on Twitter; “Remembering Lata Didi on her birth anniversary. There is so much that I recall…the innumerable interactions in which she would shower so much affection. I am glad that today, a Chowk in Ayodhya will be named after her. It is a fitting tribute to one of the greatest Indian icons.” Lata Mangeshkar Birth Anniversary: Did You Know Aaayega Aanewala Made All India Radio to Break Norms and Reveal Singer’s Name? Here’s Why!
In the presence of Chief Minister of Uttar Pradesh Yogi Adityanath inaugurated the Lata Mangeshkar Chowk in Ayodhya with a virtual address from Prime Minister Modi and the presence of Union Minister G.Kishan Reddy. A 40-foot veena has also been installed at an intersection in Ayodhya. It is the first place in the country where such a giant musical instrument has been installed. Lata Mangeshkar’s Family Establishes Old-Age Home for Artists in Nashik.
The Melody Queen:
Lata Mangeshkar was born on 28th September 1929 in Indore, Madhya Pradesh. Her father, Dinanath Mangeshkar, was a classical singer as well as a theatre artist. When she was 5 years old, she began working as a theatre artist in sangeet nataks. She also started taking singing lessons from her father. Later, at the age of 8 in 1938, Mangeshkar gave her 1st public performance. Much before India won independence, Mangeshkar started her musical journey at the age of 12. She sang two songs in the studio for the first time on the radio on December 16.
A Voice for All Ages:
Lata got her biggest break when she was given the chance to sing the song “Aayega Aanewaala” for the movie ‘Mahal’. The song was a super hit. The period of 1950s witnessed tremendous growth in her career. She worked with all the famous composers of that era like Shankar Jaikishan, S D Burman, Naushad, etc. The period of 1960s made her the queen of Bollywood playback singing. During the 1960s, Lata didi, as she was popularly known, recorded 30,000 songs and won the Guinness World Record. After this, she became the most recorded voice in history.
Check Out the Tweet Below:

Lata Mangeshkar, one of India's legendary singers, is the voice of Indian music’s golden era.

Being a successful artist, throughout her years, she has been received numerous awards including the Bharat Ratna, Padma Bhushan, Padma Vibhushan amongst many others.#MoCRemembers pic.twitter.com/lrF10LO8Uh

From Hindi to Bengali and Marathi, her range of songs remains unparalleled. She has also sung songs in Russian and Malaysian languages. She was the first Indian to perform at the Royal Albert Hall, London. She gave Bollywood many evergreen songs that were loved by people across the world. Some of her most famous songs are “ Lag Ja Gale”, “Ajib Dastan Hai Yeh”, “ Pyar Hua Iqrar Hua”, etc.  In 2001, she was the 2nd Indian vocalist to be conferred with India’s highest civilian award Bharat Ratna. The legendary singer passed away in February 2022 but continues to live in the hearts of her million fans through her evergreen songs.

(The above story first appeared on LatestLY on Sep 28, 2022 08:49 PM IST. For more news and updates on politics, world, sports, entertainment and lifestyle, log on to our website latestly.com).