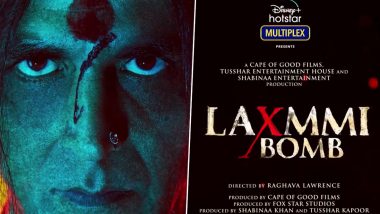 Heard the big announcement? The one that was making you impatient all this while! Akshay Kumar has finally confirmed the release date of his next, Laxmmi Bomb on Disney+ Hotstar. After months of speculations, the actor and his team have decided to release the movie on November 9 on Disney+ Hotstar. The film will mark Akshay's big Diwali release and keeping in mind, its title, the occasion couldn't be any better. Earlier, there were rumours about the film releasing on Akshay Kumar's birthday (September 9). Saif Ali Khan's Bhoot Police, Akshay Kumar's Laxmmi Bomb, Katrina Kaif's Phone Booth - Taking a Look at Upcoming Horror-Comedies in Bollywood.

Laxmmi Bomb is a remake of Tamil hit, Kanchana that starred Raghava Lawrence in the lead role. The actor was also approached to direct Akshay Kumar's remake. The film also stars Kiara Advani in the lead and would mark her first attempt in the horror-comedy genre, the second being Bhool Bhulaiyaa 2 with Kartik Aaryan. Recently we heard stories if Akshay is sceptical about releasing his movie online. The actor, however, ended all these baseless rumours by officially announcing its release date. Laxmmi Bomb on Disney+ Hotstar: Akshay Kumar Unveils Intense New Posters Ahead of the Film's OTT Release (View Pics).

Laxmmi Bomb would be Disney+ Hotstar's fourth big release after Dil Bechara, Sadak 2 and Khuda Haafiz. The announcement was made on a big scale when the OTT platform roped in all the biggies to officially come on board with their even bigger projects. Now, the only release pending to have a release date is Ajay Devgn's Bhuj: The Pride of India.

(The above story first appeared on LatestLY on Sep 16, 2020 03:22 PM IST. For more news and updates on politics, world, sports, entertainment and lifestyle, log on to our website latestly.com).