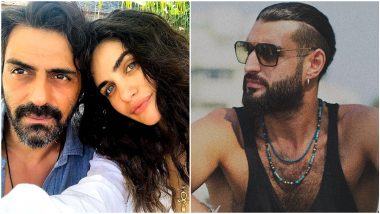 The Narcotics Control Bureau (NCB) is cracking down on Bollywood's drug rackets. In the latest, as per a report by The Quint, the NCB has arrested Gabriella Demetraides' brother Agisilaos in an alleged narcotics case on Sunday. Agisilaos reportedly helps his sister run a clothing brand in Mumbai. Gabriella is Bollywood actor Arjun Rampal's partner and the two have a baby together. The report also suggested that the couple is also under the scanner of the bureau. Rhea Chakraborty Files Complaint With CBI Against Neighbour Dimple Thawani for Making False and Misleading Allegations Against Her.

The report added that the probe was launched against Agisilaos in the wake of the same investigation that landed Rhea Chakraborty, her brother Showik Chakraborty and over a dozen others behind bars. The man was found in possession of charas and alprazolam, a banned tablet, after which he was arrested.

As per the report, the NCB has said that Agisilaos used to supply drugs and they have the evidence to crack down on the racket. Rhea Chakraborty Visits Santa Cruz Police Station to Mark Attendance, Photographed First Time After Getting Bail.

Sources also told the news portal that Agisilaos' marketing business was only used by him to use as a front for his drug supply. He was arrested under the section 27a of NDPS Act and will remain in the custody for two days.

The drug probe was launched on the sidelines of CBI investigation into the death of Sushant Singh Rajput. The ED alerted the NCB after coming across suspicious chats. Rhea was recently released on bail after staying in judicial custody for over a month in Byculla jail. Her brother Showik was denied bail.

(The above story first appeared on LatestLY on Oct 18, 2020 07:16 PM IST. For more news and updates on politics, world, sports, entertainment and lifestyle, log on to our website latestly.com).