Akshay Kumar and Neeraj Pandey's collaboration, Crack, was announced amid much fanfare but the project got shelved and we finally know why. 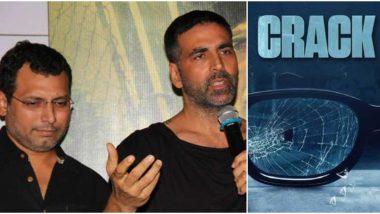 The success of Akshay Kumar and Neeraj Pandey's combo had paved a way for them to collaborate for yet another project, Crack. The announcement was done amid much fanfare and we even had a look at the film's poster. However, a few months down the line there was no update available on their new collaboration and industry insiders were whispering about the probability that it has been shelved - the news which was confirmed later by the filmmaker. While no reason for the same was discussed then, the Special 26 director has finally elaborated on what went wrong then. Neeraj Pandey Gave a Tribute to Bollywood with His Hotstar Series Special Ops, Here’s How.

In his recent conversation with Mumbai Mirror, when the filmmaker was asked about what went wrong with Crack, he simply said, "It’s on the back-burner with no immediate plans of revival. I was not happy with the script, but if I manage to crack something good in the future, I might (revive it)." The reports of Crack getting shelved were followed by a tension brewing in between the director and Akshay Kumar. However, Neeraj insists all is well between them and there's no animosity whatsoever. Akshay Kumar Is Mighty Angry With COVIDIOTS Who Are Violating Lockdown Rules (Watch Video).

When asked if there's any reunion happening with Akshay in future, the director said, "There has been no fall-out with Akshay, so, why the question of reunion? I am moving on with Chanakya (led by Ajay Devgn) and he is doing other films. It’s a great responsibility for both of us and we have to wait for the right project." Well, hopefully, the wait won't be too long.

(The above story first appeared on LatestLY on Mar 27, 2020 11:33 AM IST. For more news and updates on politics, world, sports, entertainment and lifestyle, log on to our website latestly.com).