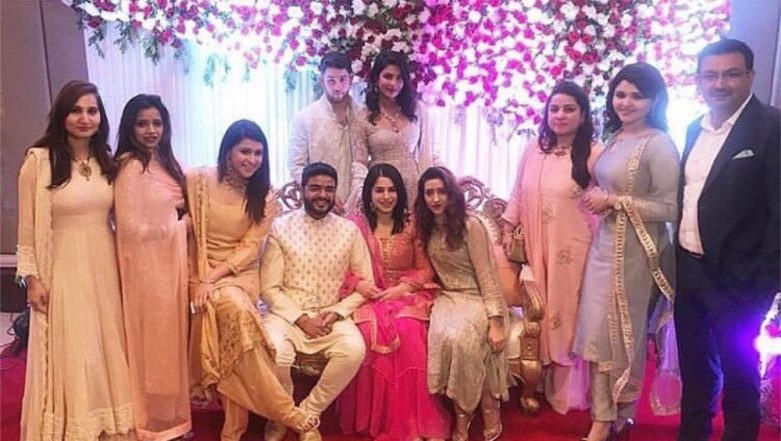 Priyanka Chopra and Nick Jonas are right now in the maximum city. Nope, she is not here for any project or shooting for the film but for her personal reasons. Her brother, Siddharth Chopra got engaged to Ishita Kumar and she was here to attend the roka ceremony. The actress has been posting about the visit to India but no one really knew the purpose until she posted the pictures from the intimate roka ceremony. Now, her pics with Nick are doing the rounds on social media from this function. Isn’t It Romantic? Priyanka Chopra Calls Nick Jonas ‘Best Travel Buddy’ as They Reach India – See Pic.

Peecee is seen wearing a ivory themed lehenga with her hair let loose. Nick is also complementing her by wearing a similar shade of kurta. As usual, their 'oh-so-in-love' candid pictures went viral on the social media and we can't deny that they indeed looked adorable together here.  Check out the snaps here:

Mr and Mrs Jonas With Siddharth and Ishita

Mr and Mrs Jonas have been making head turns with their starry outings lately. Be it their family vacations or their Vanity Fair After Party 2019 appearance, they are just all over the internet. During a recent appearance on Koffee With Karan 6, she even confessed her love for husband saying that she hates nothing about him and loves everything about him. However, she also mentioned that one thing which she 'tolerates' about him that his habit of being on time. She also mentioned how she flirts with him all the time as she started dating him and got married just a few months ago. Well, all we know is that more set of shimmery pics are on their way to us during Siddharth and Ishita's wedding. Wait for it!