Reacting to the same incident, actress Priyanka Chopra Jonas took to Twitter to share a note condemning their deaths. 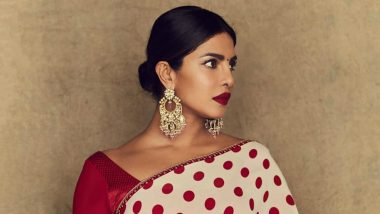 In a shocking incident, the nation was left in a shock after hearing about the custodial deaths of a father and son in Tamil Nadu. Earlier this week, Jayaraj, 59, and his son Bennix, 31, were allegedly brutalised by the Sathankulam police after the duo were reported to have kept their mobile shop open for a few minutes extending the permit time. Their tragic death has left everyone outraged and netizens have now been asking for justice online as they began trending #JusticeForJayarajAndFenix. Reacting to the same incident, actress Priyanka Chopra Jonas took to Twitter to share a note condemning their deaths. Tuticorin Custodial Deaths: DMK MP Kanimozhi Writes to NHRC, Meets Bereaved Family to Hand Over Rs 25 Lakh Cheque.

In her note, Priyanka wrote, "Reeling from what I'm hearing. Absolutely stunned, sad and angry. No human being deserves such brutality, whatever be their crime. The guilty must not be allowed to go unpunished. We need facts. I cannot even begin to imagine what the family must be going through. Sending strength and prayers. We need to use our collective voices to seek #JusticeForJayarajandBennicks." #JusticeforJayarajAndFenix: Tuticorin Custodial Death Sparks Anger in Tamil Nadu, Netizens Demand Justice For Slain Father-Son Duo.

Recently, police brutality in US against an African-American man, George Floyd led to his death and the nation came in support and took to the streets to support the Black Lives Matter movement and stand against systematic racism. Priyanka had reacted to the George Floyd incident too though her support for the Black Lives Matter movement also invited her some flak after netizens pointed out how she had endorsed skin whitening products in the past.

(The above story first appeared on LatestLY on Jun 27, 2020 08:18 AM IST. For more news and updates on politics, world, sports, entertainment and lifestyle, log on to our website latestly.com).