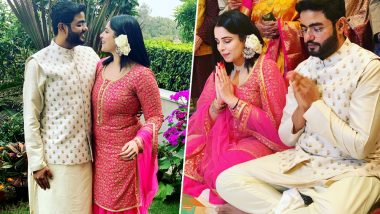 We recently saw Priyanka Chopra's post with her 'best travel buddy' and husband Nick Jonas in India and well, we now know why the two are in Delhi. Priyanka Chopra's younger brother Siddharth Chopra is officially taken now. The actress took to social media to announce the Roka ceremony of her brother Siddharth Chopra with his girlfriend Ishita Kumar. Priyanka shared some lovely pictures from the ceremony and even had a heart-warming message for her younger brother.

Sharing the good news, the Isn't It Romantic star wrote, "So proud of my baby brother. Ishita welcome to the family.. you r so beautiful together.. I wish you both the best for the future Happy Roka!! @ishittaakumar @siddharthchopra89 ❤️🎉." Isn’t It Romantic? Priyanka Chopra Calls Nick Jonas ‘Best Travel Buddy’ as They Reach India – See Pic

Here are the amazing pictures from the Roka ceremony:

So proud of my baby brother. Ishita welcome to the family.. you r so beautiful together.. I wish you both the best for the future ! Happy Roka!! @ishittaakumar @siddharthchopra89 ❤️🎉

Ishita and Siddharth were known to have been dating since a while. In the past, Ishita has posted pictures with her boyfriend Siddharth as the couple spent time exploring United Kingdom together. In fact, the couple recently celebrated an adorable Valentine's Day when Ishita shared a picture of him with a gift wrapping bow.

Currently, who's who of Bollywood flew to Switzerland for the pre-wedding bash of Akash Ambani's wedding and while we wondered why Priyanka Chopra was missing, we know why. Here's wishing PC's brother a big congratulations!

(The above story first appeared on LatestLY on Feb 27, 2019 05:45 PM IST. For more news and updates on politics, world, sports, entertainment and lifestyle, log on to our website latestly.com).