Priyanka Chopra to Return With Subhash Ghai's Aitraaz Sequel; Will Akshay Kumar Reunite With the Actress? 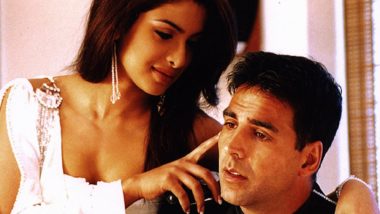 Priyanka Chopra and Akshay Kumar in a still from Aitraaz. (File Photo)

Priyanka Chopra is ruling the west with her ambitious charm and there is hardly anyone who can replace her in Bollywood as well. There has been a lot of speculations regarding her comeback in Bollywood after Sanjay Leela Bhansali's Bajirao Mastani. While rumors were rife that she would be seen in Rakesh Sharma Biopic (Salute), it now turns out that she may be seen in Aitraaz sequel. PeeCee's negative character as Sonia Roy in this Akshay Kumar- Kareena Kapoor Khan starrer was critically acclaimed. Now, yet again she will be back with a badass avatar in this installment, if reports are believed to be true.

A source told Mumbai Mirror, "It's a new story with a new title. Subhash Ghai has already had a word with Priyanka Chopra and the two have discussed the film. She loves the idea of a sequel to a film which won her accolades for her performance in a negative role and is excited to feature in the second installment of the franchise. She is keen to collaborate with Ghai again and has even told him that she will try working around her dates."

Chopra's character, Sonia, commits suicide in the climax of Aitraaz. Hence, the sequel will have to have a fresh concept for sure! Meanwhile, we also wonder who will replace Akshay Kumar! It is an open secret that alleged ex- lovers Akki and PC have vowed not to work with each other and hence, there is likely to be any reunion for Ghai's untitled next. The reports also suggested that the desi girl will be having a meeting with the Taal director only after she wraps up the shoot of Quantico 3. Well, there cannot be a perfect film other than this for her re- entry in Bollywood! What say?

(The above story first appeared on LatestLY on Feb 20, 2018 12:15 PM IST. For more news and updates on politics, world, sports, entertainment and lifestyle, log on to our website latestly.com).